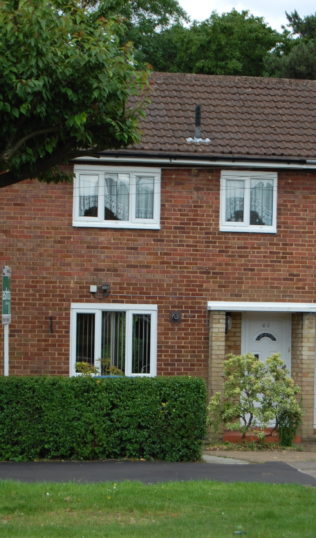 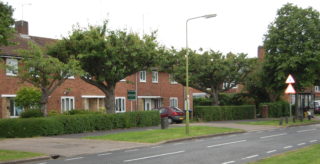 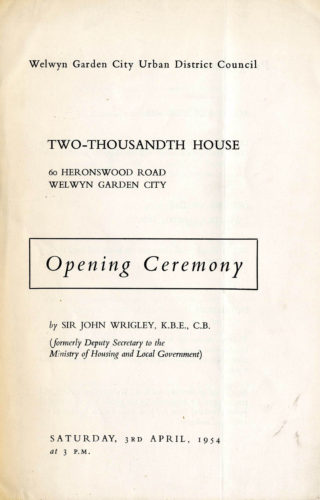 An Address was given by Councillor W H Playle, J.P., C.C Chairman of the Housing Committee, who also introduced Sir John Wrigley.

Sir John Wrigley then opened the two thousandth house and handed the Key to the tenant.

The two-thousandth house and the adjoining house no 58 Heronswood Road, were inspected by the official party, after which both houses were open for public inspection until 7pm.

Nos. 58 and 60 Heronswood Road, Welwyn Garden City, remained open for inspection by the public and all interested persons each day from 2-7pm from 4th April until the 15th April inclusive.

The Housing committee consisted of the following members:

Councillor A Vickery JP (Chairman of the Council)

No. 60 Heronswood Road, has been completely furnished by Messrs. William Perring & Co Limited, Welwyn Garden City, and the gas appliances and fittings have been provided by the Eastern Gas Board.

The total house area including store was 912 sq. ft. and the approximate cost was £1525 exclusive of services, land, etc., estimated to cost £265. Provisional rent (including rates) 35s 6d per week.

A continuous burning fire is provided in the living Room and the radiator in the Dining Recess is supplied from the boiler behind the fire, to which the B.B.U Summer-time Attachment can be fitted. In addition, a thermostatically controlled immersion heater is fitted in the calorifier in the airing cupboard upon the landing, for use in the summer months. A gas wash-boiler is part of the standerd equipment.

This information was taken from the opening Ceremony leaflet, there is a copy at Hertordshire Archives and Local Studies ref. UDC 21/42/1