You are here: Home>History of Welwyn Garden City>Where Do You Think You Live?>A house on Parkway

A house on Parkway

My brother said "You know Dad there's a lovely lot of new houses being built in Welwyn Garden City. Why don't we go and have a look at them?"

Trained as a secretary - war work. 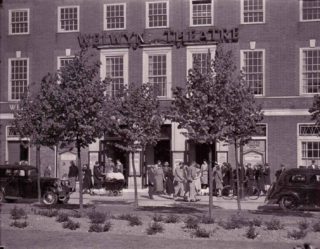 Queueing to see a Marlene Dietrich film in 1938

She explained how the family first visited the town. “It was really because both my brother and I, we lived in Knebworth with my parents, and both went to Hitchin Grammar Schools. I went to the girls and my brother to the boys and we had friends who lived here naturally because everybody went on the train to school and I remember my brother saying “You know Dad” he said “there’s a lovely lot of new houses being built in Welwyn Garden City. Why don’t we go and have a look at them?” So off we went and came, had a look at them and they were brand new houses on Parkway from more or less opposite the school and just down to, well, as far as the Garden City extended in those days and my father said “Do you know?” he said “That’s a good idea. That would be rather nice.” So we came to the Garden City and that was on the 28 August six days before War broke out”.

The pupils at the Girls Grammar School had one week off when War was announced “then I went back to school and then everything as normal. My brother got called up into the RAF and so all his wonderful idea of being in the Garden City amongst his friends who were all called up too. So it was a great change but we were very pleased that we had come because we had the cinema and, of course, we had the new Stores and shops – Knebworth was a bit quiet – and I must admit I liked it and when the cinema decided that they would open to the public again, they closed it for a little while, then they opened it again and they said we could only sit in alternate rows. I mean honestly, when you think of it! I don’t know why but there you are. Presumably so there weren’t too many people in the cinema. Well that didn’t last very long and we all got back to normal and we had enormous queues always, for the cinema, which stretched down the alleyway down the side.” Audrey remembered going to the cinema every week to see “Oh, everything and anything that was going at the time.”

Then as she got older “it was nice to go to dances at the Cherry Tree and at Parkway Restaurant as they had them then. We had a lot of foreign people who were allocated the empty properties next door to us because we were only – I think there were only two other than ourselves had taken up the new properties and we had people like a Rabbi Pollark and all sorts of interesting people from Germany and then we had people from London and the firms took the properties over and allocated them to staff and then when they got settled then we had a soldiers. The different regiments came to do their different – well, they were waiting really to go abroad – so we had all sorts of different regiments and the house next door turned out to be a rather nice sergeants’ mess!”