You are here: Home>History of Welwyn Garden City>Where Do You Think You Live?>First impressions of the town in 1931

First impressions of the town in 1931

My first impression was how small everything was 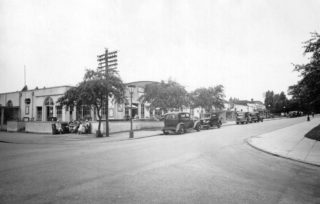 Pat came to Welwyn Garden city in 1931. Her father had lived in the town for 2 years previously working away from the family. He then got a job at Welwyn Stores as a buyer for several different departments. Moving here Pat felt her mother, a musician, was the pioneer intellectually “she attached to Quaker families here and became very friendly with all”.

“my first impression was how small everything was. I thought they (WGC houses) were like dolls houses”… The family lived at Barleycroft “and there weren’t any houses beyond there. It was just fields and I think Murphy Radio had it as their sports ground or something as there used to be fetes on that field and I also remember an aeroplane landing on the field at the back of Handside but it was much bigger – it went from our house really and there was a hedge dividing it and the next bit because in that hedge we used to have camps as it was outside our house and of course all of those houses weren’t there.”

Pat attended Parkway School at first “because I had to take this 11plus and therefore I worked there under Miss Coe who was not very kind and I hated it. I hated all sorts of things which were so different from the kind of love and affection where I had come from and I seem to remember that I went off on a bus to Hitchin to take the exam and passed it but having a sister younger my parents must have argued again. I don’t know, but as I didn’t get a free place they couldn’t afford to do it for two of us, and my mother believed it was the wrong thing to do anyway to send a child out of the town to school, so finally I arrived at Handside and that worked very well because it was on the doorstep.”

With her father working as a buyer Pat knew the Welwyn Stores well. “The Stores were lovely. It had little cage things where the girls were taking the money and they got 7 shillings and sixpence a week poor darlings and if you had an account you just said “Charge” and as children we thought this was heaven. You’d just pick things up and say “Charge” and there it is you see. So money didn’t count. In fact I can remember when I was a bit older, about 13 probably, I had these long fair plaits which I hated because the boys at school would take the ribbons out and I hated this so much that I went into the Stores and said to the hairdresser “Do you charge haircuts?” and they said yes. “Will you cut my hair off?” So they did and my father was so cross!”