You are here: Home>History of Welwyn Garden City>Where Do You Think You Live?>Grandparents came to WGC in 1920

Grandparents came to WGC in 1920

From two rooms in Peartree Lane to a home of their own. 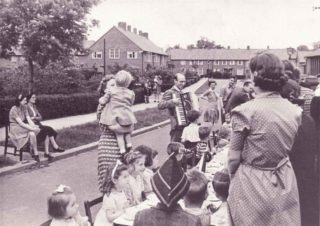 This extract was recorded by the Welwyn Garden Heritage Trust on 22nd July 2009.

Her father was 16 at the time, and his two elder brothers were in the railway industry but in the area of Retford in Nottinghamshire, where the family originally came from. Welwyn Garden City was very much in its infancy. “It was just the very beginnings. I think they started building in Handside Lane. I think they were the earliest concrete houses in Handside Lane in the ‘20s.”

Daphne has lived in and around the town all her life “I went to school at Parkway to begin with, because when my mother was alive we were living in 107 Longcroft Lane; concrete houses, now demolished – and I started at Parkway School, with Miss Coe. But then my mother fell ill. She had already had a breast removed but the cancer must have spread, as it does. And after my brother was born he was only two years old when she passed away in 1937. I can’t remember the date now. So we two children the went to live at Nanny’s on Ayot Green, and I went to Ayot School for a while, because my father didn’t want me to miss any schooling.”

“My father married again and we got a house in Sandpit Road – 33 Sandpit Road. And we were there all through the war. He was an Air Raid Warden and he used to have to go up on the roof of the Council Offices and make sure there were no incendiary bombs landed.”

She was still living at Sandpit Road when she met her future husband Owen and “had been working since 11th September 1944, in a shop at the bottom of Howardsgate, next door but one to Lloyds Bank. It’s still there but it’s an optician now. It was an electrical shop, but in my day it was W J Elliott Limited. They sold pianos and records and music, and also radio repairs. This was before television came back in 1957, I think.”

The audio clip relates how the newly married couple got a home of their own.