You are here: Home>History of Welwyn Garden City>Where Do You Think You Live?>Work and Play

Shorthand typing at Roche and dances at The Cherry Tree 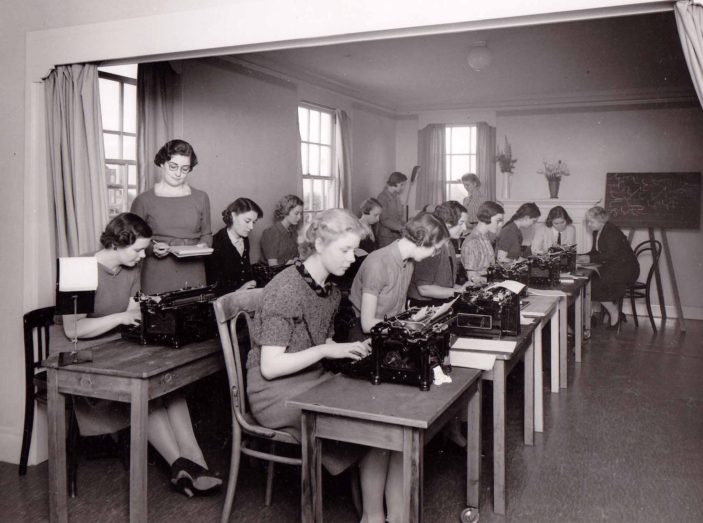 Secretarial School. Miss Jones, who ran the school, is seated at rear on the right.

This memory was recorded by the Welwyn Garden Heritage Trust in January 2010.

Marion’s parents came to WGC in 1925. ” I think my father must have seen, he was a civil servant and worked in London, and I think he must have seen perhaps adverts for Welwyn Garden City, a new town. And we moved here into 47 Valley Road. At that time, that was the left hand side coming from the town centre and there weren’t any houses on the right hand side, just field.  And we stayed there more or less until the war.”

“I remember we had a light railway up Valley Road for the building materials. There were wooden buildings on the Campus for various banks, I think, and of course there was the Welwyn Stores on the corner where Rosanne House is, and that was it, so to speak.”

“I very briefly went to Applecroft, and then my sister who was three years older than me had already started at Hitchin Girls’ Grammar School, and so I then went to Hitchin Girls’ Grammar School.  I think I can only have been about eight or something, you know, on the train every morning. Unsupervised, you know. And I stayed there until apparently I had TB glands in my leg and one was considered a bit frail, and so I left school and in fact I think I had to go into the Royal Free Hospital in London for about a month. And at that stage my mother decided that really wasn’t strong enough to go out to work until she discovered that I was playing tennis all day, when she decided that I was fit enough to go out to work.

So I took a shorthand-tying class, with a Miss Jones, who had a sort of very large wooden building in a garden in Handside Lane, where she taught shorthand-typing. Oh she was very strict. I think it was about a six-month course you know – it wasn’t one of these couple of years.  And when I had reached the appropriate standard in shorthand I then went to work, originally for a small firm in Broadwater Road – I can’t remember their name. They were making sort of plastic laminates, but I can’t remember the name. Then Roche advertised, so I went up to there for a year and then came back to Broadwater Road and stayed there for part of the war.”

Marion also recalled the social life “we had dances at the Cherry Tree and you wouldn’t dream of going unless you were in what I call ‘full fig’.  I mean we all had long dresses, all very sort of proper so to speak. “

“I think there was a club where we played table tennis, and that from my recollection was at one of these wooden buildings on the Campus. We also belonged to a fairly small walking group – we went on a walk a week, so to speak. And that became eventually the Mid-Herts Footpath Society, and I belonged to that for a time. Marjorie Bailey (has she been mentioned?) had a dancing club. Well, she had that building in Applecroft Road, more or less next to the school. It’s privately owned now, and I remember we learned tap dancing amongst other things. She had us doing a sort of little display of dances that we had learned. It was much smaller of course in those days so more a sort of social gathering.”