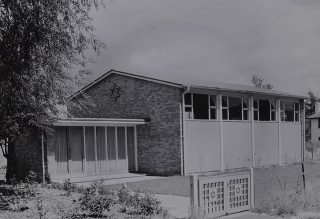 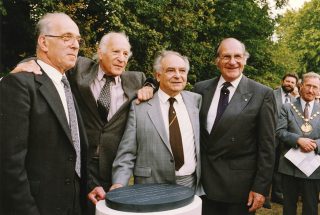 Inauguration of the memorial on Parkway, 1990. Sam Ostro (far left) with Wim Van Leer and others who were rescued.
Ken Wright 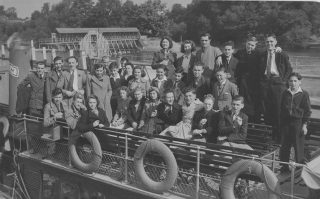 Sam Ostro and other staff from General Stampers enjoying an outing on the Thames, 1940s 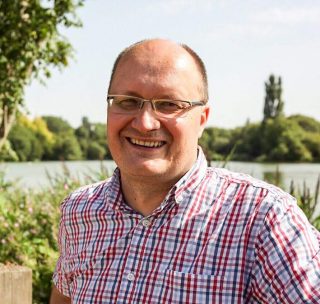 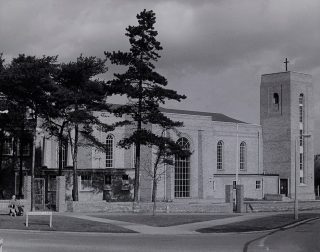 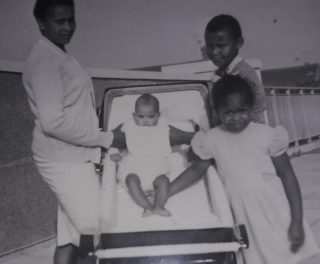 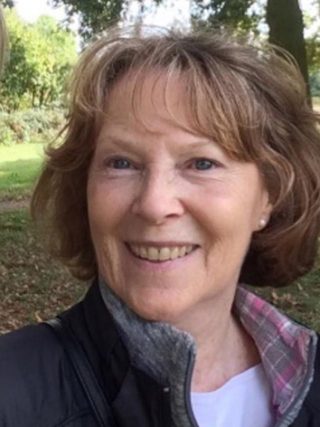 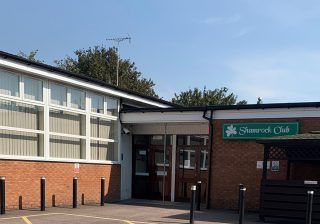 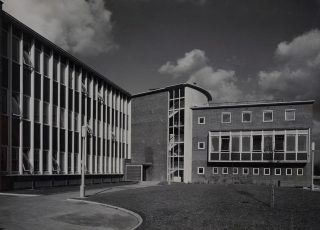 World War II was the driver for so much growth and change in Welwyn Garden City.

‘Welwyn Garden City is salvation to me.’ (Sam Ostro)

In early 1939, Sam Ostro, then aged 21, was saved from Nazi Germany thanks to a Welwyn Garden rescue committee. He and handful of other young men were given accommodation and work locally.  They were joined by over 2500 evacuees.  Sam recalls,‘There were thousands that wanted to get out, thousands, THOUSANDS.  It meant separating from the family. I left my mother and older brother behind.  I don’t know who picked me, but I was picked, and I had to make a decision. Can you imagine having to make such a decision?’

In late 1940, the Jewish community began to meet weekly. At the end of the war, many evacuees returned home and where there had been 120 families, there were just thirty.  Undeterred, a synagogue was built and opened on 3rd September 1955.  The building stands as a testament to tolerance and the congregation has blossomed once more.

The war brought many Polish people to Britain in support of the Allied war effort, and afterwards tens of thousands stayed on. More joined them in the 1980s due to social and political unrest at home. After Poland joined the European Union in 2004, still more took the opportunity to come to Britain. For many in the Polish community, connections with Catholic church were important. Religious ties have been extended with cultural events and organisations, such as the Polish Saturday School.  Local community development worker, Michal Swieniak, recalls,

‘I came to the UK in 2005 and I was elected as a Liberal Democrat councillor for the borough of Welwyn Hatfield in 2014. I hope my journey, as well as many others, will inspire and empower groups and individuals to make a real difference.’African, Caribbean and Asian Communities

Life was not always easy for the ‘Windrush Generation,’ as they were known. Lorna Sanson, who left Jamaica in 1956, settled here in 1960. Although Lorna found most people to be very friendly and very kind, but she recalls that there were certain firms who would not employ her due to the colour of her skin and this lack of trust extended to other authority figures that she met.

In 1967 an international families club, Welwyn One World, was set up to bring people together and celebrate diversity in the town. Ten years later, the Welwyn Islamic Society was formed and is today work is well underway to establish a place of worship for Muslims. At the last census, there were around 5500 people from Black, Asian and other minority ethnic groups in the town.  Lorna Sanson said

‘I got as far as The Cherry Tree and fell in love with the town.’

When the war was over, many British towns lay in ruins, the economy was weak and there was a labour shortage. The government had bold plans to create a better and fairer society through improved healthcare, education and urban planning and more. Many in countries then part of the British Empire responded to the government’s call for help. A small group of West Indians and Asians moved to Welwyn Garden City and made it their home. They worked in manufacturing, public transport and in the new National Health Service.

One resident, Mary Ruddick, was born here to Irish parents. Her father came to escape a hard life on the family farm and her mother had been sent over to do domestic work at Digswell Lodge, before going on to become a cook at ICI.

The Catholic church was an important influence especially on these young people far from home and reports would be sent home to reassure families that their offspring were living a virtuous life. There was a real sense of community with music and dancing with ceilidh bands held in a local scout hut until the Shamrock Club was built in 1969. It continues to provide a focal point for the Irish community, welcoming members and guests from several neighbouring counties.

A small but vibrant Irish community has grown up in Welwyn Garden City. Some came because friends were already working here. Others came for summer jobs at ICI and Murphy Radio. Work was so plentiful in the early post-war years that it was said if you started a job one morning and you didn’t like it, you could leave and get another before teatime.