You are here: Home>New contributions>Don Fisher: Work in the Offices of Louis de Soissons

Don Fisher: Work in the Offices of Louis de Soissons

Don Fisher has lived in Welwyn Garden City all his life and as a boy went to work in the offices of Louis de Soissons and Partners.  The office was located above the W H Smiths shop in Howardsgate where Superdrug is today.

When Don left Handside Secondary Modern School at the age of 15 he was recommended for the job of office boy at de Soissons’ partnership by his headmaster.

I hadn’t really got much of a clue what I wanted to do and so the headmaster, Mr Small, he’d received a request from Louis de Soisson and Partners in Welwyn Garden City, Architects, for an office boy and he selected me and sent me along…He started out making the tea and doing general jobs around the office.  The main partners at that time were John Kirkland Robertson and Eric Simpson.  Louis de Soissons was based at the London office but in his role as architect planner to the post-war Welwyn Garden City development corporation he continued to supervise the master plan for the development and design of the town.  Don was nurtured by de Soissons and the other partners and de Soissons personally intervened to ensure Don was able to join a Royal Institute of British Architects course and begin to study architecture.

I managed to get flu just at the time of the exams and I fluffed one of the exams and there was a cut off date when they were going to increase the intensity of the levels of entry and Louis wrote to the President of the RIBA  and, who he knew personally, and said look I’ve got this, what did he call me, he called me an improver in his office and he said this guy wants to be, become an architect and I think that he would do credit to the institute, would it be ok if he just came in with four O-levels instead of five and that’s how I, how I got in to start studying architectureUnder their guidance he progressed from tea-boy to learning to use a drawing board, field work with de Soissons and assisting in planning the layout of new sections of the town. 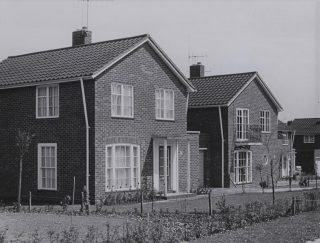 ‘I did see Louis quite a bit, he was always popping into the office, … at one time he bought a little old pumping station up at Harmer Green just above Digswell and he wanted to convert it into a sort of a country house and he needed somebody to hold the end of the tape when he was doing the surveys, so I was the office boy and so I went out with Louis two or three times taking measurements on this Harmer Green Lane pumping station, so then I was quite privileged really, but other times, what we did at that time…well when the development corporation was really getting going and building houses like crazy in Welwyn Garden … what he used to get me to do was to get the various housing types that we had, invite sort of six or seven different types of house on a layout of three or two-hundred houses and he used to get me to do blank elevations which he could then play with in terms of where he would put windows, considering the outlook and the orientation and all that sort of thing.’

Although he did not design any of the houses himself, Don became very familiar with the styles and characteristics that de Soissons’ firm used for both housing and commercial projects.

The logic behind that [the round window] is that if you have a square window it tends to call for some sort of alignment both horizontally and vertically, but if you have a round window, you can virtually dot it in anywhere and it will, you know, given a careful eye, look quite happy sitting there, but you’re right, that’s one of his hallmarks, but I think, well, what he was clever at was that, I mean, you know, he got an artist’s palette really and so you got materials, you know, that’s the brick and the roof tiles, you’ve got the type of windows, it could be Georgian windows or clear pane (?) windows or just horizontal bar windows, then you’ve got the types of front door, which can be changed and also he had a palette of different types of porches some of them which were almost just flat onto the brickwork, they didn’t give you much shelter, but gave the appearance of, what shall we say highlighting the entrance to the house and Louis was very clever at playing like this and you said that, you know, some houses look different from one side of the town to the other, but if you go into it further you might find that they are just the same type of house, but he’s played the different tune with the materials, windows, porches and all that sort of thing.Don has witnessed first-hand the expansion of the town; as a child he lived close to the town limits and was able to roam freely and easily in the adjacent countryside.  He later moved to other parts of the town and bought his first home in the newly developed Panshanger area.  Before he lived in Panshanger, when Don was a teenager member of the Ait Training Corps, he used to hang around the airfield and hitch a ride on an aircraft; perhaps taking a flight around the East Coast, or up to Yorkshire or Wales.  The rules on health and safety were very different then!

I saw gliding going on there at one time and so I joined the Air Training Corps and used to spend many a pleasant hour just going over there and thumbing rides in the aircraft, in Tigermoths, Chipmunks and Anson aircraft, it was so easy then, you know, there was no health and safety, well not much anyway and you just go over there and have a word with the officer in charge and he’d allocate you a seat in an aircraft and see what…you know, go off and get your parachute and your helmet and see you at the aircraft and so I sort of go off from a flight around the East Coast or up to Yorkshire or down to Wales, it was quite fantastic and I was only, you know, fifteen, sixteen, seventeen, marvellous.Don left Louis de Soissons and Partners in 1966 and now treasures a few hand-written notes written by Louis de Soissons giving him instructions on what he ought to draw.