Eugenics in the Garden City? 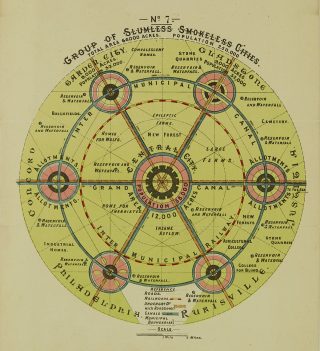 Eugenics: Science’s Greatest Scandal aired on BBC Four in October 2019 setting out to examine the origins of eugenics – a set of beliefs and practices that aim to improve the genetic quality of a human population by excluding inferior groups.

Within the show, presenter Angela Saini meets with Dr Currell in Welwyn Garden City to discuss briefly how the Howard’s utopia was at heart influenced by the principles of eugenics.

They point to Howard’s garden city map including “Home for Inebriates”, “Home for Waifs”, “College for Blind” and “Insane Asylum” as indicators of eugenic principles.

There is no denying the creation of garden cities was influenced by social up lift and improvement, Howard himself wrote the principle of his garden cities was “to raise the standard of living and comfort of all true workers of whatever grade”. To align Howard’s social reform with eugenic ideology of segregation and separation is perhaps a step too far.

In his book, To-Morrow: A Peaceful Path to Real Reform Howard has address the areas highlighted by Dr Currell. Howard wrote that these charitable and philanthropic institutions shall “not be under the control of the municipality, but are supported and managed by various public-spirited people who have been invited… to establish these institutions in an open healthy district”.

“It is but just and right that their [Garden city residents] more helpless brethren should be able to enjoy the benefits of an experiment which is designed for humanity at large”.Howard’s terminology is a product of the period in which he was writing, more so, he never details the requirements to be housed in these institutions, perhaps for the simple reason he was a social reformer not a “race” reformer.

So, Howard’s incorporation of these institutions were about finding a place for the vulnerable in utopia, not determining the place of its residences. There is nothing to suggest any malicious intent towards any groups of people but rather the contrary – Howard wants to provide a high living standard for all of humanity.