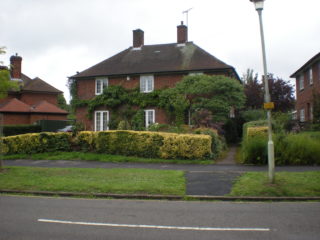 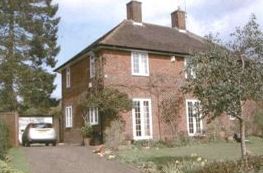 A reason for the move may have been that one of my parent’s friends was of the Dent family, the book-publishing firm, famous for their Everyman Edition of the classics. They were living in Letchworth, the first Garden City, planned and designed by Ebenezer Howard. The most likely reason was the proximity of my mother’s sister living at Digswell Water Farm.

The concept of a Garden City was described in his book, Garden Cities of Tomorrow, published in 1902, but it was not well received at the time. Howard’s first planning experiment was in Hampstead Garden Suburb, where my parents lived during WWII. There was also a considerable amount of interest in the planning in Paris, Germany and later in America. The First Garden City was located at Letchworth, about 15 miles north, and it was well established when Welwyn Garden City was founded in 1920. One of the members of the Board of Management was Richard L. Reiss, who was known to my family, and his son, also Richard, was a friend of mine. We both attended HandsideSchool (now ApplecroftSchool) in the 1920s, and later at Kings College London, both studying civil engineering.

At the beginning of the planned development, and before any building work started, a light railway (2ft gauge) was laid along several new roads to transport the building materials to the housing sites. My friends and I used to ride on the trucks, when work had ceased for the day, and occasionally, if the driver was friendly, he would let us ride with him to the various building sites. The railway system was laid out and operated by Welwyn Transport Ltd and, I think, run by Harold Hall, my mother’s sister’s husband, who originally lived at Digswell Water Farm. Eventually there was about 10 miles of track with locomotives and trucks to transport 2000 tons a week of building materials for the many housing sites.

The house my parents bought, in 1922, was No.26 Russellcroft Road, which faced south, looking down Valley Road, towards the old Great North Road, now the A1 (M) motorway. It was a typical red brick house, with five bedrooms and a large garage. Both the dining and living rooms faced south, with french doors opening on to the front garden, which was raised from the road. The back garden was not very big, mainly a lawn with flower beds round the three sides, with the garage, a separate building from the house. A photograph taken recently showed there had been no extensions, and its external appearance is exactly as I remember it as a child. Houses of that size and situation were selling then for between five hundred and a thousand pounds, but I doubt if my father paid more than six or seven hundred for ours. I was told that today a house of that size would cost about £400K! Rather different for first-time buyers today, despite the difference in earnings, who are trying to get on the housing ladder. Now it is difficult to find the deposit for a mortgage.