Part 3: Friends of the Family 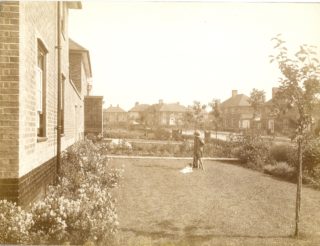 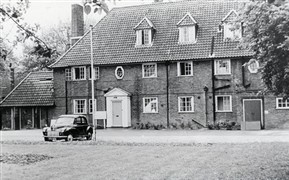 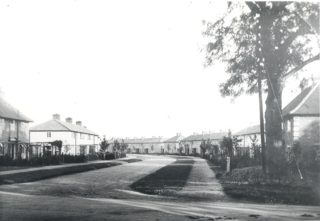 Getting my head stuck in a fence

Our neighbour on the west side, at the corner of Russelcroft, at No. 17 Valley Road was Doctor Fry and his family. One day, I recall having put my head through the trellis fence between our gardens, and being unable to remove it, because my ears stuck out at the sides. Stupid child! The doctor solved the problem by heavily greasing my ears with butter and holding them against the sides of my head, so that he could release me! There were three other doctors in the local medical practice: Doctors Furneval, Wakely and Dansie. The last two became great friends with my parents for many years, especially Dr Wakely and his brother William. I have several photographs of Dr Wakeley’s marriage to a Miss Wade in June 1930, attended by my parents, but it does not state where they were married, nor where the pictures were taken, but probably where the bride lived.

In 1929, funds were raised to build a cottage hospital and the first Matron was Miss Gladys M. Thackray, who was a great friend of my mother’s, and whose brother, Monty Thackray, a chartered surveyor, became Godfather to our youngest son Martin. In the summer term of the following year, I had my appendix removed and I remember doctor Dansie, who performed the operation, coming into my room with the appendix in a jar of spirit, and asking me whether I wanted to keep it, but my mother was horrified, so I wasn’t allowed to have it! The local dentist was Mr. W.S. Hoare, who lived at 75 Handside Lane, I remember that the visits to the dentist for the usual annual checkup were not popular with my sister and me!

Another family I remember were the Kitley sisters, Phyllis and Margery, who were close friends of my mother. Margery was married to the architect, Wynn Horner and they lived in Guessens Road. Phyllis was a dancing instructress and at Christmas and New Year she used to go to stay at the Schloss Hotel, Pontresena in Switzerland, to be the hostess arranging various entertainments for the guests, indoors in the dance hall or outdoors on the ice of the lake. My family’s albums have several pictures of her in fancy dress and skating. She once took me to London on a Green Line Coach to see a matinee with Harry Lauder performing. A funny little man, whose type of humour was probably lost on a young teenager.

Other family friends were the Sherriffs of Lemsford Mill. I think there were four sons and Eric was, at one time, a friend of my sister, Mary. Then there were the Chapmans, Gwenn and husband, with son John. Also Harold and Mary Hall, my mother’s sister, who lived at Digswell Water Farm, before moving to No.33 Valley Road; also Jack and Molly Wiseman and her brother Robin. Their father had been a civil engineer on the construction of the railways in South America. Before the war, they were managing the public house at The Shepherd and Dog, a famous pre-war pub at Fulking, on the northern slope of the Sussex Downs. Later, when I was at college, a friend and I used to go and stay in the village and help in the pub during the weekend for a free beer or two. After the war, my wife and I stayed with Jack and Molly, when they were managing The Lamb Inn, Hindon, Wiltshire.