Part 6: Leisure Activities in the Town 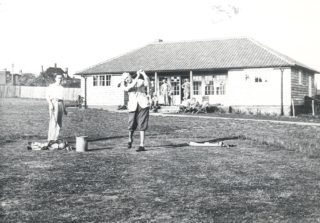 The Golf Club in 1929
Hertfordshire Archives and Local Studies 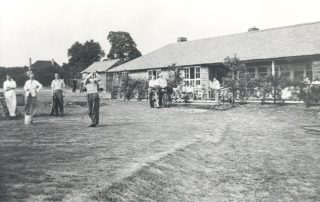 The Golf Club in 1938
Hertfordshire Archives and Local Studies 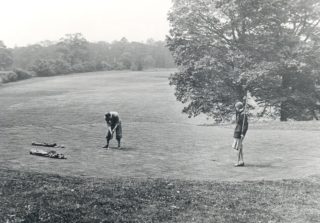 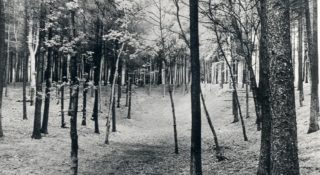 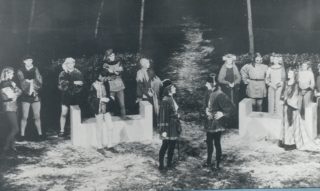 A scene from "The Twelfth night"
Hertfordshire Archives and Local Studies 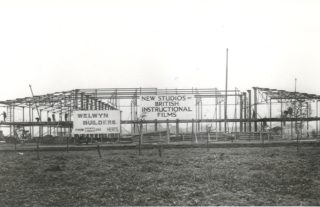 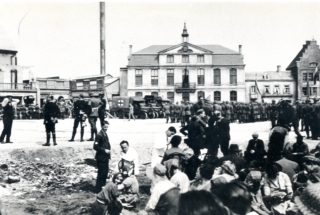 An "I was a Spy" scene
Hertfordshire Archives and Local Studies 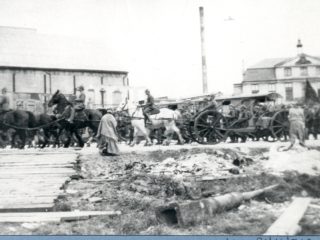 An "I was a Spy" scene
Hertfordshire Archives and Local Studies

The town’s sporting life was provided for by tennis courts opposite The Cherry Tree; and a cricket pitch at Digswell House, the ground being maintained at the expense of Richard Reiss senior, and the pavilion is now a memorial to him, in a very beautiful setting in front of the house. Today there are football and rugby clubs in the town. The first 9-hole golf course was constructed and opened off Brockswood Lane in 1923, a short distance from our house. It was increased to an eighteen-hole course in 1930. Both my parents were members, and my mother won a number of eclectic competitions, but sadly the silver spoons she won for prizes were stolen during a burglary. My father was not a very good player, but my mother gave me a few clubs: a mashie, a niblick and a putter. I started to play when I was about 12 and later when I was overseas after the war. I had a handicap of 11, but never managed to reach single figures. The course had one very tricky hole, with a large pond in the middle of the fairway, into which I frequently put a number of balls when I failed to drive over it. As I couldn’t afford to lose them, it meant removing my shoes and socks and wading in to recover them. The pond wasn’t very deep, but it was not a good thing to have to do in the winter. This is the golf course where Nick Faldo started playing, before becoming UK Open Champion and winning many international competitions around the world, including the US Masters at the famous Fort Augusta golf course in America.

The Population of Welwyn Garden City in 1922 was about 1000, and there were various clubs for music, drama and the arts. In 1925 a theatre society was founded, and it presented Shakespeare plays in The Dell, a natural amphitheatre in Sherrards Wood, where they performed A Midsummer Nights Dream and the following year The Tempest. I remember attending with my parents and watching several of our friends acting various parts. It was a beautiful setting and ideal for producing Shakespeare and other plays. I have a photograph of it. Soon after, a society called the Welwyn Thalians was started and run by Flora Robson and W.H.C. Thorn, which my sister joined and acted in one or two plays for children. Flora Robson worked in the Shredded Wheat Factory as a welfare officer, but later she left the town after Welwyn Studios filmed Dance Little Lady in which she acted. Flora then went to act in Cambridge and London where she became a famous and successful leading actress.

In 1928 the Welwyn Theatre was built, with seating for about 1200, but it was mainly used as a cinema. I remember seeing my first talking film, All Quiet on the Western Front, to a full house of all age groups. As we came out, the children were each given a free bar of Mickey Mouse Nougat, something I have hated ever since! The big event in the same year was the arrival of a firm, British Instructional Films, who built new studios, opened by the Colonial Secretary, L.S. Amery MP, though what his connection with the industry was I can’t imagine. However, the studios were a great success and made a lot of silent and talking films in the first three years. There were frequent requests for people to be ‘extras’ in the crowd scenes and for a film about World War I called I Was a Spy, with hundreds of extras brought in by train, to add to the locals, and I earned a few shillings for a days work on a number of occasions.

George Bernard Shaw, the author and playwright, who used to live nearby at Ayot St Lawrence, was often to be seen cycling around the district, with ‘his red beard a flaming banner in the wind’. He used to get his beard cut at the Welwyn Stores, by Mr Harvey, where my mother took me for haircuts, but I never met him during any of my visits. Local people used to ask the barber for hair from George Bernard Shaw’s beard, and he would oblige, but it isn’t on record whether Harvey charged for the hair.