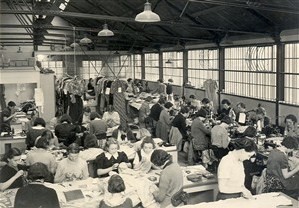 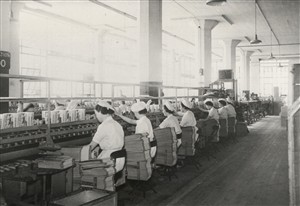 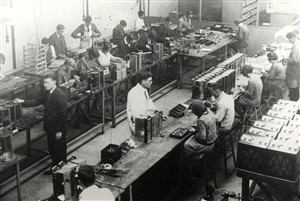 Several industrial firms started up in the Black Fan area east of the main railway line, including Cresta silks, which designed and made clothes for women. I remember my mother buying a beautiful silk evening gown, which she wore for special occasions. The firm was founded by T.M. Heron in Cornwall and then transferred to Welwyn. The firm also made curtains for the Shakespeare Memorial Theatre in Stratford on Avon when it was opened in 1930. In 1980, the business was brought by Debenhams and ceased trading. The owner’s son, Patrick Heron, was at school with me at St George’s, Harpenden, although he was three years younger, so I didn’t really know him. He later became a famous abstract and conceptual artist, whose studio was in Newlyn, Cornwall, and he exhibited in the local branch of the Tate Gallery. He was married to Richard Reiss junior’s younger sister Delia, and died in Cornwall in 1999. His type of abstract painting is not to my liking.

A very famous firm to be established was the Shredded Wheat factory (now Nabisco and later Great Western Foods), whose manager, Mr Wallace, lived opposite us in Russellcroft Road. The factory began production in November 1925, and was opened the following year by the Marquis of Salisbury, but the factory is now deserted. The cereal’s originator was an American lawyer, Henry Perky (nothing to do with the TV programme Pinky & Perky). In the week following the opening, a 19-year-old female operator hand packed 32,400 biscuits and became first champion. I still eat the biscuits, but I don’t know who makes them now.

Another factory that became famous was Frank Murphy’s Wireless (radio) works, making a 4-valve portable radio, which became very popular. The firm later became one of the big six in the world, until the Japanese took over world production. Making radio sets became one of my hobbies when I was at school, the first being a crystal set with a cat’s whisker, which I made to fit into a matchbox. Used with headphones, one could listen to the 2LO radio station at night in the dormitory after lights out! The attraction was the dance bands of Henry Hall and other leaders with the names of Geraldo, Edmundo Ross, Harry Roy, Carol Gibbons and the Savoy Hotel Orpheans and others producing big band sound. They still have followers today, but most of the present day music is beyond comprehension by my generation.

I used to be able to visit many new factories as they started in town, as they were always anxious to show visitors their new works. One of my favourites was Dawney and Sons, steel manufacturers, who produced steel girders, stanchions, and roof trusses for building works. Again, perhaps this led to my interest in building structures and later to civil engineering.

A more interesting arrival was a new bakery, This was opened by Neville Chamberlain, who became Prime Minister (1937-1940) just before World War II. At their first Christmas, the staff made an enormous scale model cake of the Welwyn Stores. It was a rich fruit cake with golden almond icing, which weighed over one hundred pounds. It was sold, in slices, in less than an hour after being put on sale. I don’t remember whether I was lucky enough to get a piece, but I definitely like some cake (except seed cake) with my tea. Perhaps this started it!

Just before we left Welwyn Garden City, a photographic studio opened, called Studio Lisa, owned by Mr. & Mrs. Sheridan. Shortly after arriving, they were granted a Royal Warrant, and I remember my sister Mary having her portrait taken when aged about 18. I have her picture, mounted as a cut out, made from the original portrait photograph.