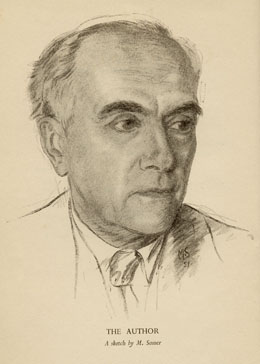 A sketch of C B Purdom
M Somer 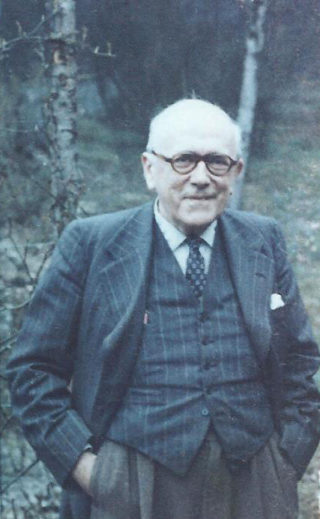 C B Purdom in the 1960s
Antoinette de Pourtales

Charles Benjamin Purdom, born in Lambeth, London on 15th October 1883, was a Letchworth Garden City and Welwyn Garden City pioneer. With Ebenezer Howard and Frederic Osborn he was a founder member of the National Garden Cities Committee, formed immediately after the first World War. In 1919 he became Secretary of the Garden Cities and Town Planning Association and the editor of its monthly journal.

In March 1928 C. B. Purdom resigned his positions in Welwyn Stores Ltd. A few weeks later he also resigned from the board of Welwyn Garden City Ltd.. He did this after a sustained campaign against him by officials of the company backed by some board members. C B Purdom was a highly dedicated and hard-working man, who was a staunch proponent of the garden cities idea, and who was devoted to the development of Welwyn Garden City. Without any inkling of what was about to happen, he was suddenly and ruthlessly rejected by those with whom he worked, and abandoned by people whom he regarded as his friends as well as colleagues. What happened was devastating for Purdom, as it surely would be for anybody finding himself in such a situation.

In the 1930s he was elected to Welwyn Garden City U.D.C. as an Independent member.

C B Purdom married Lilian Cutlar in 1912 and they produced four children, one of whom Edmund became a Hollywood actor in the 1950s.

C B Purdom spent most of his life living in Welwyn Garden City till his death in 1965.

C B Purdom was a remarkably gifted man with great executive ability and an immense capacity for detailed work. He also had a reputation for being outspoken, stubborn, tactless and difficult to get on with. He brought these diverse qualities in full measure to amateur drama, for which he had a great and abiding enthusiasm.

A perfectionist, he founded the Letchworth Dramatic Society in 1906 and under his guidance it achieved a considerable reputation. Purdom maintained that there was greater value in a performance by amateurs who loved drama for its own sake than one by professionals who performed for a living. He also held that amateurs could make a more worthwhile contribution to the theatre by concentrating on less popular and non-commercial works than by attempting to ape the professionals. For example, in 1912 his Letchworth society gave the first performance by English players of G. B. Shaw’s “The Shewing up of Blanco Posnet” when that play was still banned by the censor.

Purdom edited the Swan edition of Shakespeare’s plays, and in addition to his writings about the New Town concept he wrote books on Producing Shakespeare and What Happens in Shakespeare. His Producing Plays is something of a standard work for amateurs, as is his Drama Festivals and their Adjudication. He had much influence on festival work through the Guild of Drama Adjudicators, of which he was a founder member and the first Secretary.

Welwyn Garden City owes a great debt of gratitude to C. B. Purdom, no account of the amateur theatre in WGC should fail to acknowledge his contribution.

Scarcely had the paint dried on the first newly-constructed houses of Welwyn Garden City when, in May 1921, Purdom gathered together a group of local residents and produced “The Shewing up of Blanco Posnet” in the Brickwall Barn. This was followed later in the year by the Welwyn Theatre Society’s “Candida” in the restaurant of the Cherry Tree. Between then and mid-1929 a total of 37 additional full length productions (one of them performed in the French language) were staged in WGC by local societies and another nine by visiting companies.

Nor was C. B. Purdom inactive in drama festivals. The first one-act drama festival organised by the British Drama League (BDL) was held in 1926 and attracted seven entrants. The adjudicator was W. A. Darlington (the Daily Telegraph’s theatre critic) and he travelled to the parts of the country where those seven competitors performed. The winners were the Huddersfield Thespians, whose production of “St Simeon Stylites” was subsequently taken to America to compete unsuccessfully in a Little Theatre Tournament in New York. It was perhaps characteristic of C. B. Purdom that he lost no time in making known his disagreement with the adjudicator’s decision. He felt that the Theatre Society’s entry (“The Banns of Marriage”, produced by him) was more worthy of the first place – and in the light of the adjudicator’s comments it is difficult not to feel some sympathy with his point of view. The adjudicator had said in the Daily Telegraph that the WGC Society’s production was on a commercial level and would succeed anywhere, while the Huddersfield entry was a more representative amateur effort. Purdom considered this to be a reflection on Huddersfield’s standard of performance.

But C B Purdom can be said to have had the last laugh when, towards the end of 1926, the BDL’s National Festival of Community Drama was established. This time 107 societies took part and early in 1927 Purdom’s production of “Mr. Sampson”, again with the Welwyn Theatre Society, was unanimously placed first by the three judges who included W. A. Darlington. The other two were Sybil Thorndike and John Drinkwater. The Theatre Society then took the play to America, where it also came first in the New York Little Theatre Tournament, winning the Belasco Cup.

C B Purdom became well-known as drama critic, particularly whilst editor and drama critic of Everyman (1929-32) and New Britain (1933-34).

In March 1938 Purdom was, for two years, appointed general secretary of the actors’ union Equity. The job of general secretary involved mostly discussions with theatre managers regarding pay and conditions of Equity members. In his autobiography, he paints a bleak picture of the times. There was very high unemployment amongst actors; theatre managers were frequently ruthless in their handling of actors; and some of the leaders of Equity were contemptuous of or indifferent towards the plight of the rank and file within their organisation.

In 1947 saw the founding of the Guild of Drama Adjudicators (GODA), C B Purdom being the first secretary.

A History of Welwyn Garden City by Roger Filler