You are here: Home>People>Cochrane Family Memories 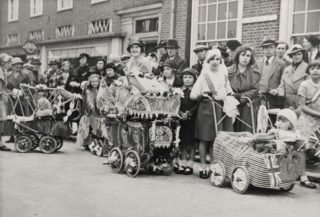 It  was in the year 1935, when I was 5 , and as  with all little boys and girls the world was a frighting but exciting place to find ourselves in.Our particular worldwas especially so, I suppose, because the ‘Garden City’ had appeared just across the back field and was clearly visible through the line of elm trees in the middle distance. We were the villagers of Hatfield Hyde.

As I recall, there seemed to be no resentment to this intrusion on our horizon, (I think I would have been aware of it had there been,–I seem to be in  my recollections pretty clear on most things).I suppose, for my family the new,highly fashionable, model city promised more customers for a cwt. of coal.–

We were Cochrane’s Coal of ‘the row,’ Lower Hatfield Hyde.This string of row houses began with the Woodman pub and ended with Walbies Shop. Where we lived in the row was eventually cleared to make way for the Upperfield Rd./Cole Green Lane junction.I often ponder why I remember so clearly the world of those days.I mean the families, for instance, starting from that den of iniquity,the Woodman- the Sams,Thrussels,Piggots,Golders,Houlton,us,Mrs Birch, Cochrane’s    (cousin), Den Burton’s and that lot I was forbidden to play with, the Swallows.

Now Walbies was a wonderous place, not that it was of any stature–just the end house in the block turned into a shop,through the front door,butchery on the left and groceries on the right,Mr. Sid Hart presiding.We only seemed to see Mr. Walby himself infrequently–possibly he had another shop elsewhere.The row of sloping biscuit tins in front of the counter with see-through lids teased us  no end –and the fireworks in the glass case just inside the door before Guy Fawkes—and the cottonwool snow houses at Christmas—–hold on now

A trip to Welwyn Stores

—–I was a  small boy, being hustled along beside my brother,(who was lucky enough to be in the   pushchair) on a typical Saturday afternoon outing to the Welwyn Stores 1929 Ltd. The early part of the trip was certainly a trial for Mother; past Walbies, to meet the beginning of the ‘CINDER PATH’. This was our only link to the Garden City. Only about 1/4 mile  in length but wheeling on cinders is hard going. On to the gap in the hedge that brought us onto the dead end of Ludwick Way (Salisbury Rd. marked  the city boundary).Now, this gap in the hedge was the equivalent to a breach in the ramparts of a medieval  castle to my mother. My father and uncle were mostly to blame, I admit, as several times a day they drove horses and carts carrying tons of coal through the gap, turning it into a quagmire. Do not get your shoes muddy was the order of the day. The pushchair, empty at this point, was my mother’s problem!

On to the stores by way of Ludwick Way, Hyde Way and Bridge Way East. There were many wonders yet to come.  First, there was the Welwyn Builders railway. Seemed to us to run all over the place. A light railway, with about a 36 in. gauge; a tramcar driven by a petrol or diesel motor pulling waggons with tipable hoppers like wedges of cheese on wheels. The engineman sat sideways which I thought strange. It was a thrill when one came along. A remaining part of this track could still be seen well into the 50’s ,cutting across the old Stanborough Rd. at the place where it entered the gravel pits.

Later, as a Handside schoolboy, I enjoyed very exciting and very DANGEROUS fun on the gravel washer, the tarmac machine and brickwork machinery in this area. How  did we get away with it ? But that’s another story.

Back to the trip with Mum to the stores—as I recall, the railway ran up Ludwick Way, along Peartree Lane, Millgreen Rd, and Broadwater, but not Salisbury Rd. Of course, it extended to other parts of the town outside our young world of this time. It was that metallic smell emanating from the British Lead Mills that I remember as being the next noteworthy impression I have. I later wondered          how anyone could stand living on that part of Peartree Lane. Continuing our walk up Hydeway we would arrive at the Match Factory at the corner of Broadwater Rd. The building  was all glass windows

–I well remember on that very wet day in 1935, the diamond jubilee of King George V and Queen Mary, walking along Broadwater with our Ludwick school class to the Match Factory where we had a party in celebration.We came away with a mug having a picture of the King and Queen on it—We were wet through!.Did they actually make matches there,by the way?.

Now on down Broadwater to Bridge Rd. East.At this corner, the Welwyn Foundry’s smelter came into view  and sometimes we would see the sparks and flames shooting from the chimney— very impressive to a 5 yr.old.In later life as an engineer, MIMechE, I found out what was going on in there—I’m still impressed.

Up Bridge Rd., past Dawnay’s and the cranes to the right, the arch of the Shredded Wheat gate to the left, and ahead Hunters Bridge. I often wonder if it was named for Hunter the farmer of Handside,who my great grandfather traveled  from Scotland with,as his farrier. Now comes the most looked-forward-to part—if my mother hadn’t been extra careful, we would be on the bridge when an Atlantic Class express would come roaring through in a torrent of smoke and steam that because of the lattice openwork of the walkway, would seem to be threatening to take us with it. So much for that!

All that a boy of any age would want!

Now, down the bridge to the highly respectable Cherry Tree on the right and Jenner Parsons on the left. But perhaps at this time it was Tim Birkin’s garage as I do recall catching sight of something I know now as a racing Bentley on one of these excursions beside the pushchair. Now next door, opposite the Police Station, stood Munts, a shop full of all that a boy of any age would want. There were bicycles of every description and much else besides especially at Christmas. The overhead windows giving the place a very airy atmosphere, the creaky hardwood strip floor and the smell of— I don’t know what, made it a boy’s heaven’  ——and the city center was’nt there yet,from Munt’s to Parkway was an open field. A footpath ,very muddy, made its way forward.

There was fun on the way though; a pipe sticking out of the ground usually sprayed water all around. Mud! that was what living in or near this vision of the future was all about. Eventually we arrived at the Welwyn Stores(1929) Ltd, with those funny shaped lamp-posts,but we were more interested in the windmill  pedlar in the street. He was usually there holding up a sheaf of straw into which the windmills were stuck, in their different colours of celluloid, all turning in the wind made a wonderful impression on the children like us. It still seems to me that,though we badly wanted one, they still looked better in the sheaf. On into the interior of this wooden trestle roof building, not at all like English places we were used to! Looking back today, that building appears more Californian and probably was.

A live monkey on the counter

I wonder if any one can help me in this next somewhat cloudy reminiscence—-a small crowd of shoppers were standing one day, by the marble counter where the man in a white coat patted up the butter  looking up at what I       remember as a live monkey sitting up in the wooden trestles of the roof. Worrying my mother about it did not satisfy me at all at the time, so it remains a mystery to this day!

The long walk home may have taken us by Welwyn Bakeries where the smell of bread baking would almost overpower the smell of Shredded Wheat———but then, not quite……. So ends the outing to the stores, circa 1935, just in time for my Mum to get Dad’s supper….