You are here: Home>People>Councillor Lander Inspects the Fire Brigade

Good work by a smart squad 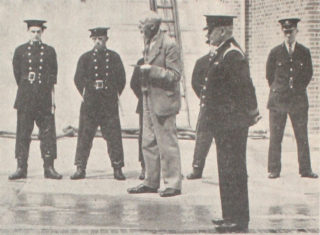 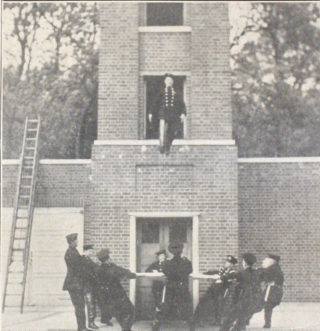 A Fireman makes a stately descent into the sheet from the third floor of the tower
Welwyn Times, photo by Lisa 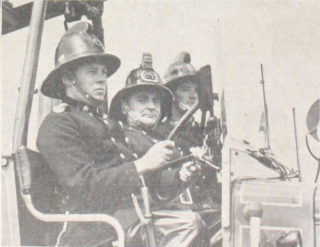 Driver Jack Palmer at the wheel of the new motor pump. Next to him is Capt. Dougherty and on the far side is Second Officer Jack Barnes
Welwyn Times, Photo by Lisa

These photos appeared in the Welwyn Times on 19 May 1938 on page 4 along with the following article:

“Children of all ages joined with our local Councillors and officials last Saturday afternoon in proudly witnessing the annual display of Welwyn Garden City’s Fire Brigade. Among the guests at the diplay was Mr. Stanley Gifford, Chairman of Welwyn R.D.C. Fire Brigade Committee.

The event had special significance in that the new Leyland Motor Pump was formally handed over to councillor Clapham Lander as Chairman of the Council.

Under the command of Fire Chief Dougherty the new pump with its older small brother made an excellent demonstration turn-out, followed by the Garden City ambulance. After a circuit of the capmus that drew alarmed glances from citizens unaware of the occation for the demonstration, the brigade returned to the fire-station yard for drill exercises.

These included smart displays of the “Fireman’s Lift,” jumping from high up the hose tower into a sheet, hose drill and rescue work by means of the new fire escape and a very ingenious piece of apparatus that enables a helpless person to be slowly lowered from a height in a rope sling.

Finally there was a dramatic rescue from a “smoke-filled room” by a fireman (complete with gas mask and oxygen cylinders) of a victim who was given artificial respiration and removed in an ambulance.

Councillor Lander inspected the men and in an interesting brief address said that this years inspection was of more than ordinary importance; they were now taking over formally the new Leyland motor-pump, and it was appropriate to review the growth of the brigade during the last sixteen years.

When it was first formed in 1922, Capt. W. E. James was in command of four volunteers. They had a hose reel on a hand cart and 30 feet of hose. In spite of this meagre equipment they did very fine work at a fire at the Bridge Road Stores and at another outbreak at Digswell Lodge.

In 1927 the late Capt. Kelly took over the command and in 1930 they purchased their first motor pump. This was still being kept as a reserve and he was glad to hear that it still was capable of very useful service.

Shortly after this there was a fire at the Theatre and the prompt work of the brigade saved it from being burnt down.

Their present chief, Capt. Dougherty took command in 1932 and with his team of twelve men had made steady progress.

He warmly congratulated Capt. Dougherty and the brigade as a whole on their very high standard of efficiency.

The town could be assured that the brigade was fully equipped and competent to deal with any fire likely to occur in Welwyn Garden City.”