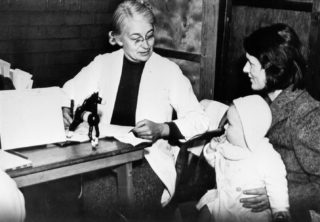 Among the town’s earliest pioneers were Dr Gladys Miall-Smith and her husband Dr Hubert Fry who arrived in Welwyn Garden City in March 1922, when the population was around 800.

They had been invited to the town by their friend Richard Reiss, one of Welwyn Garden’s founding fathers. News of their arrival travelled fast, and within half an hour the first patient was knocking on their door asking if the lady doctor had arrived yet. She was closely followed into the town by Dr Furnival in July 1922. Tragically Dr Fry died in 1930 but Dr Miall Smith became something of an institution in WGC, bringing hundreds of Garden Citizens into the world and worked tirelessly to improve health standards in the town, alongside Celia Reiss, Richard Reiss’s wife, before the arrival of the National Health Service.

When I interviewed Dr Miall Smith for my book on the history of the town in the mid 1980s, she was approaching the end of her life, but she was still as bright as a button and happy to talk about the early days of the town. Of how she visited primitive cottages at Black Fan (since demolished) where there was no electricity, no mains water or drainage, or of one of her daring-do missions in crossing the branch railway line in her little car, tying a scarf round the gate to keep it open, hoping that she would not encounter a train chuffing round the corner as she made her way across and through the several fields and tracks to make a house call in Digswell.

When we talked about the early days of the Second World War and of the evacuees and the threat of a major offensive she told me that the only offensive she saw was an epidemic of German measles. She had met one woman who thought it was Hitler’s secret weapon! After I met her in her home in Guessens Road, she became frail and finished her days at the Elizabeth House in Panshanger. I am not sure what year she died. I guess around 1984-85.

Were you one of Dr Miall Smith’s patients? Share your memories by logging on today.