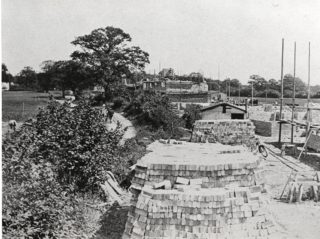 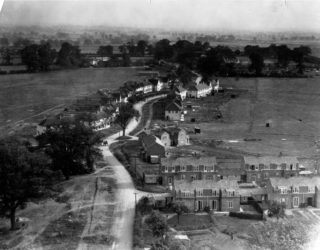 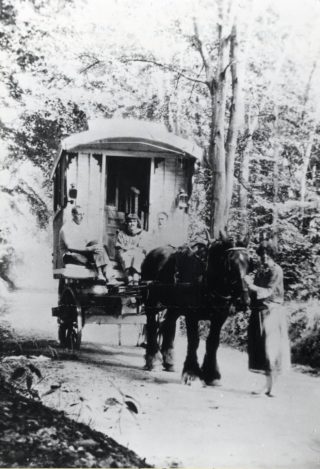 Continued from Part One

We reached the old hamlet of Handside, where the few old cottages still are, and turned along Handside Lane. Here some houses were being built along the edge of a cornfield, and were nearly up to roof-height. These are the houses between Russellcroft Road and Guessens Road. We went past the old barn, and then in use of the farm, and now the Barn Theatre, and the cowman’s house, which is now the Hostel, and arrived at Handside Farmhouse, which stood at the head of the Old Drive. In fact, that was the drive belonging to the house.

I still can’t bear to think of that house having been demolished.
Later, when the Garden City was beginning to grow, some good old fashioned tennis parties were held there, at which the Horn family were good enough to welcome the upstarts, and encourage the aborigines to mix with them. After the tennis, a huge tea was laid in the dining room on an enormous mahogany table which must have been a t least 15 feet long.
I can’t think why writers always talk about a table “groaning” under its load of food – on those occasions it was more often the consumers who did the groaning.
Well, on that day in 1920 we only knocked at the back door. The maid fetched Miss Horn; we were given large glasses of fresh milk, and something to eat – probably large wedges of home-made cake, and were staggered at not being allowed to pay.
I think some of the farm people who were about looked at us as if we were the first arrivals from another planet. I expect we looked fairly peculiar in any case, as we never considered appearances in those days, as long as we were comfortable and cool.
At that time, old Mr Horn, the farther our “old” Mr Horn, (who died a year or two ago in March 1967), at his son’s house in Essex) was still at Handside Farm, with his son and daughter, Mr Jack and Miss Mildred Horn.
The old gentleman was never seen without on those hats, sometimes called a high-low hat or a Winston Churchill (a cross between a tall hat and a bowler). The story went that old Mr Horn shouted at Handside, his orders were obeyed at Brickwall, on the North Road. Brickwall is the hold house next to Poultry Services.

Well, we went home and talked it over, and decided to come, and as we had no home bar a showman’s caravan, we arrived in that, one evening in September 1920, after a five day’s tour from Esher, where we had been living on a farm,. The caravan was drawn by a large brown horse hired from a coal-merchant,
We camped the first night in the field next to the The Red Lion. The first thing we noticed was the wonderful air (no petrol or diesel fumes, even on the North Road!) It was just getting an autumn nip, and we thought we had never breathed air like it.
We woke the next morning to find that about three caravan-loads of gypsies had arrived in the field. They were most friendly and interested, and wanted to swap horses! About the middle of the morning there was a knock on our door, and there was one of the gypsy ladies, looking all conspiratorial – “psst! Would you see the Missis’ caravan while she is out”? Well, we didn’t want to offend her, so we accepted the invitation, only hoping the Missis would not come back too soon. Her caravan was worth a visit. It was full of plate glass, polished brass and solid mahogany, and I felt sorry for their horse. It must have weighed about two or three tons.

We went down during the day to buy eggs and milk from Brickwall Farm, and Mr & Mrs Horn very kindly offered to let us put the caravan in their rick-yard, and their son Bill, then about 19, came round with an enormous horse to do the moving job.
We must, by then, have sent our own temporary horse back to the coal merchant where he belonged. I don’t remember seeing him off, but he must have gone by train from Ayot Green station, as that was the only station for miles – and he was probably the only passenger for weeks.
We went on living in the caravan in the rickyard till nearly Christmas. We had a very small kitchen range, about the right size for a dolls’ house, but we made cakes and blackberry jam and did all the usual cooking, and helped it out sometimes with a camp fire. We scorned the help of artificial modern aids like oil stoves – I don’t know how we didn’t start a prairie fire or burn down the farm buildings, as that was one of the hottest, sunniest autumns I ever remember, but Mason was an expert camper, and knew how to live in the most remote places with practically no resources.
Every morning he had to dress as much like a “city gent” as he ever could, and go off to Ayot Green Station for a train to London. There was no station, and not even a halt yet, for the future Garden City.

I was ‘taken in’ by the Horns as one of the family, and went to all the parish work parties, whist-drives and other excitement at Lemsford. We had hockey matches, ‘home and ‘away’. The home matches were played on the field which is now part of the golf course, just above Brockswood Lane, and there was a big tea party afterwards for the teams and all their friends. Goodness knows where they all came from, but there was every kind of vehicle in the yard, including traps and horses.
We went to the ‘away’ matches in a trap with a fat little pony. These visits were an opportunity of seeing some of the old farmhouses with their large families, making their own occupations and interests. This was a last look at old England. There was no television, no wireless, not many cars, and girls did not necessarily find a job or a career outside their house.
We went to St Albans behind the same little pony driven by Mrs Horn – all though Lemsford and the country lanes. We had a large basket of eggs to sell, and had to bring back all the shopping for a week.
We must have been very healthy and strong, for we had cold baths in a tin bath in an outhouse with only three sides, and we hung an old sack over the missing side. Since we had the whole country side to ourselves, we might as well have had the baths in the open. And if you are wondering where the water came from, we dipped it out of a spring higher up in the field. We had to draw all the drinking water from a well outside the farmhouse.

As soon as we arrived at Brickwall their hens apparently began to lay fewer and fewer eggs. This looked rather bad, and nobody knew whether the health of the hens, or our criminal record wanted looking into. However Mr Horn had a remedy, and one day a magic egg packed with mustard was laid in on the nest boxes. This affected an immediate cure, and gave Nibby the surprise of his life.