You are here: Home>People>MR G E BULLEN LOOKS BACK 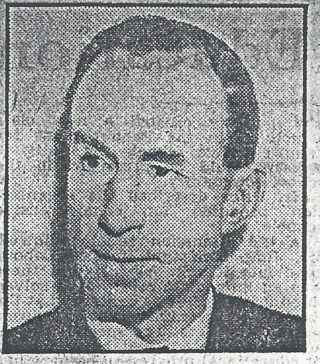 Memories of the early days of Welwyn Garden City are revived by Mr. George E Bullen of 92 Woodhall Lane, who has lived in the town almost from the time it was founded, and who, on Monday, completes twenty-one years service as a member of the staff of the urban council.

Mr. Bullen joined the staff of the local authority on December 17, 1930, when the council offices consisted of three small, temporary buildings in Bridge road, near where now stands the 330 bus shelter and the frontage of Welwyn Department Store. Formerly a rent collector, Mr. Bullen has for several years been a member of the staff in the Treasurer’s department.

One of the town’s very earliest residents, Mr. Bullen came to the Garden City with his parents from Retford, Nottinghamshire, at the age of 16, in June 1920, the year the town was founded.

Mr. Bullen, as an inhabitant of over 31 years standing, has vivid memories of the pioneer years of the hew town; the days of mud and gum boots, the makeshift Army huts, used for religious and social gatherings, dances and office accommodation.

He remembers the German prisoners of World War 1, branded by the blue or brown circles on their tunics, still in the district, awaiting repatriation; and the tranquility of Sherrards Wood as he puts it, “before becoming ‘shredded’ in its serene beauty”.

He remembers too, the first houses then being built and occupied in Handside Lane. These houses and the cottages, already existing on the estate of four square miles, comprised the new town of Welwyn Garden City in 1920.

The railway station was an improvised platform on the bend of the Luton branch line near Hunters Bridge. Within sight of the platform was the original Cherry Tree restaurant, a temporary wooden structure facing the railway line, and still remembered as the place where the staff of Welwyn Garden City Ltd. and its subsidiaries held their gay Christmas parties. Mr. Bullen was for several years employed in the old estate office.

Mr. Bullen remembers Guessens Road before it was surfaced and during prolonged wet spells, as “sea of liquid mud”. No road in the town, he says, was ever in such a state before completion.

Very few of the old country lanes exist today. One of these is, however, still to be seen running alongside Stanborough Lane. For several years Lower Handside retained its original country status as a narrow lane, linking up with Tinkers Hill, now known as Lemsford Lane.

Only those people who came to Welwyn Garden City before the Blakemere Road development – Mr. Bullen among them – can remember the old iron bridge, spanning the Luton branch line, before the present Digswell Road bridge replaced it. No road crossed the line at this point, the bridge being used solely by local farm labour and pedestrians.

Mr. Bullen recalls that in the summer of 1920, corn-cutters were busy on the last wheat in the Brockswood Lane and High Oaks area, while tip wagons on the light railway track were talking building materials to the new housing sites nearby.

One of the first dramatic groups formed presented plays in a barn at Brickhill Lodge Farm. Mr. Bullen took part in one of these “serving” on the “jury” in Bernard Shaw’s “The Showing up of Blanco Posnet.” There was a full house, he says, which suggests that almost the entire population was present!

Mr. Bullen lives close to the spot on which once stood a rather old building known as “Flint Cottage”. This was demolished a number of years ago to make way for the Woodhall Lane development. On the site now stands the home of his father-in-law, Mr. John Hart.

Mr. Bullen is well known, locally, as a musician. He began studying music at the age of ten and first played the organ at a church service two years later.

His studies took him to Trinity College of Music, London and soon after coming to Welwyn GardenCity he was coached by the late Mr. Thomas Hassard, organist at Welwyn parish church for 64 years, for the examination of the Royal College of Organists. Early in 1928, Mr. Bullen won his diploma on becoming an Associate of the college. Some months later, however, he had to abandon his studies owing to a serious operation.

He had held posts as organist at churches at Ayot St. Peter, Codicote and St. Albans, and also played at Welwyn Garden City Free Church.

He was for a number of years piano accompanist for the Welwyn Garden City Music Society’s concerts. He has played for local talent as well as BBC artistes. He has also served as treasurer of the local Gramophone Music Society. Teaching the piano is his main hobby.