A Floral Festival to commemorate 90 years 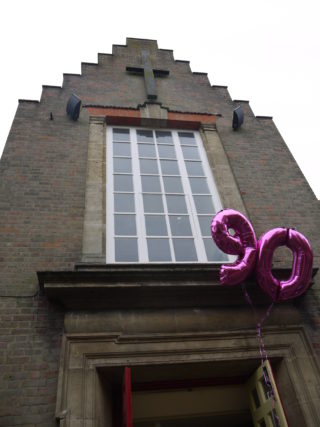 The Free Church at 90
Jane Sartin 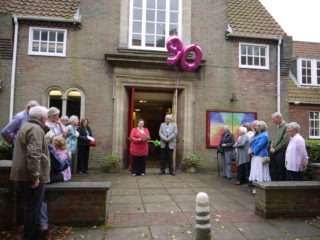 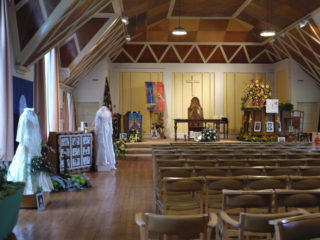 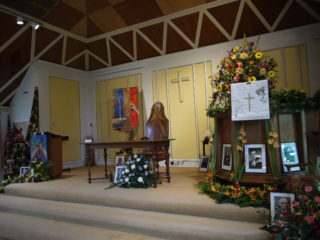 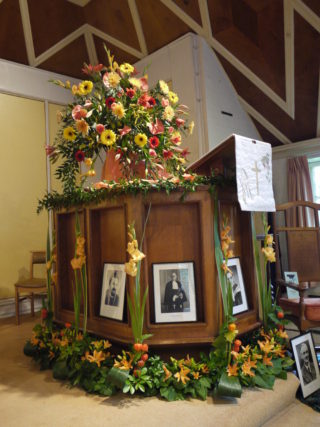 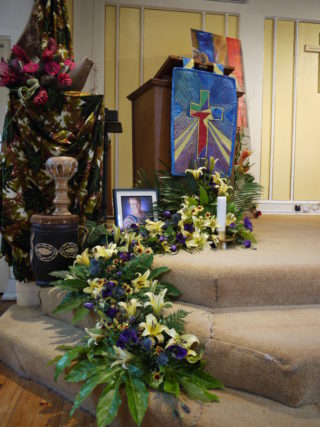 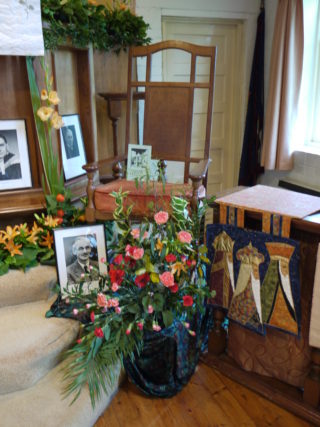 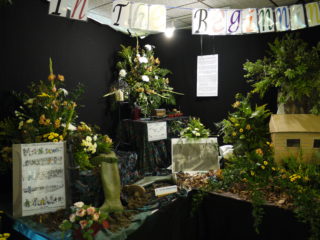 'In the Beginning' floral arrangement by Pam Worsley
Jane Sartin 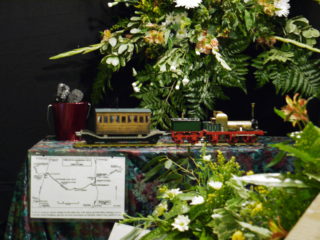 'In the Beginning', part of floral arrangement by Pam Worsley
Jane Sartin 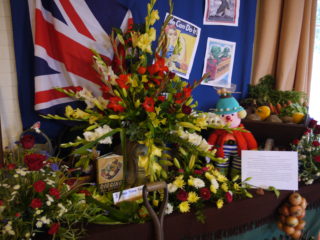 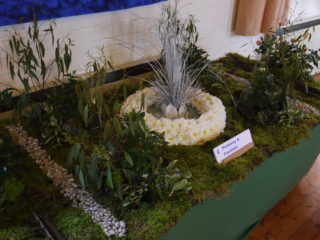 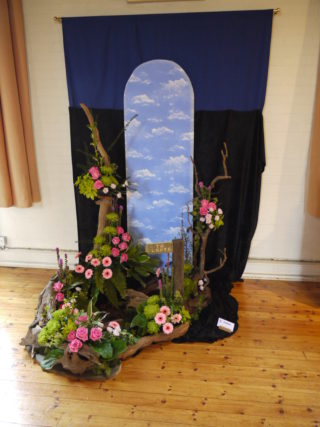 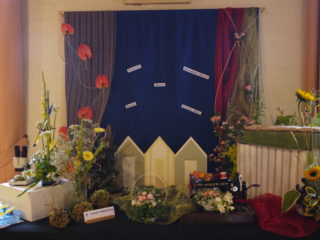 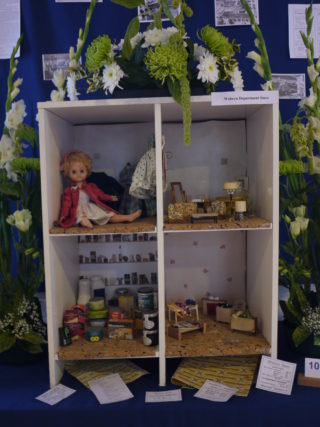 'Shopping', floral arrangement by Friends of the Church
Jane Sartin 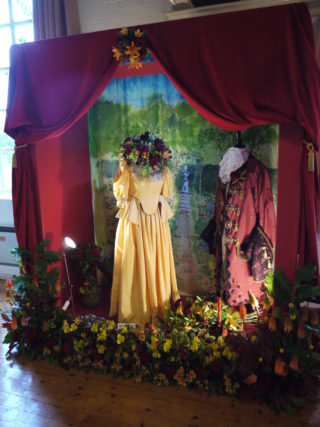 The church began life with a service on 1st May 1921 held in ‘The Meeting Place’, one of the workmen’s huts (on what is now the Campus) used during the construction of the first parts of the town.

From this beginning, the church began saving up for its own building. By means of sales of work, regular monthly collections and other special efforts, the Building Fund had reached £2,500 by 1928. On affiliation to the Presbyterian Church of England came the offer of additional financial help in the form of grants and loans at nominal interest, so it was possible to go ahead at once with plans for the erection of a permanent building on the site already acquired.

On the afternoon of the 16th June 1928 the ceremony of dedicating the land for the future building took place. It had been decided to dispense with the formality of laying a foundation stone and the act of commencement was performed by Captain W E James (the Welwyn Garden City Company engineer) cutting the first turf in the presence of a distinguished gather. The Moderator of the General Assembly, Dr Carnegie Simpson, gave the address and also conducted services next day in the Handside School Hall.

The Parkway site had been designated for the Free Church as early as 1922 when it was included in the original Town Plans. Mr Louis de Soissons, the Welwyn Garden City Company architect, had also been appointed architect for the Free Church and his plans show a large church facing Parkway with seating capacity of 1000. Other parts of the complex would have formed a quadrangle in which there would have been an open air pulpit, presumably for those occasions when the congregation could have been expected to exceed 1000 capacity of the main church. In 1928, the building could only proceed on the Sunday School Hall and associated rooms and this basic has been the nucleus of the Free Church ever since.

From the earliest days, ecumenism had been to the forefront of thinking and planning. The building included, beneath the platform at the east end of the main hall, an immersion baptistry to enable those of the Baptist tradition who wished it, to be baptised by total immersion. Although not now used, records do show that use was made in the early days.

The new building was ready for occupation within eight months of commencement of operations, the cost, including the land, was £9,156. On Saturday 2nd February 1929, a service of Dedication took place led by the Minister, The Revd. James Burns with the address given by the Revd. W Lewis Robertson, the then General Secretary of the Presbyterian Church of England.

Originally, a grand piano was used to accompany the services, but in 1936, a pipe organ was installed. This organ came from a North London Church and remained in use for twenty years.

A Memorial Chair to Captain W E James, one of the Church founders, was installed in 1950.

Over the years, the building being a multi-purpose structure, saw heavy use. In 1956, a plan to increase the seating capacity and build additional accommodation for youth activities was approved. A year later, work began, the first turf being cut by Mr James Gray with the help of Ann James, the granddaughter of Captain W E James. This extension was formally opened on 9th November 1957 by the Revd. J I Evans, Moderator of the North London Presbytery who was presented with a key by the Architect, Mr J Kirkland Robertson, a partner of Louis de Soissons.

In 1958, the Main Hall was altered. The pipe organ was replaced by a Compton Electronic organ from Haling Grammar School which allowed the platform to be cleared and refurbished with a new Pulpit, Lectern and Communion Table. The old organ was donated to the daughter church in Woodhall Lane.

The extensions and alterations provided the church with four additional rooms at the western end. The total cost including new furnishings and organ amounted to £9,886.

The Compton organ was replaced by the present organ in 1972.

Since the major extension in 1956/57, a number of other improvements and alterations have been undertaken which have resulted in one of the most flexible church buildings for its size, in existence.

On 10th/11th September 2011, the Free Church celebrated 90 years with a Flower Festival. A feature of the flower displays was depiction of various scenes of Welwyn Garden City.