You are here: Home>Places>Hospitals>Cottage Hospital 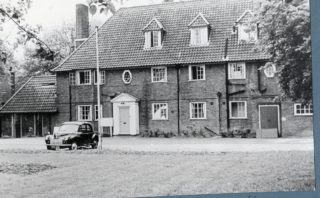 Welwyn Garden City’s original cottage hospital was founded in January 1929 when The Hollies Nursing Home in Elm Gardens was purchased with eight beds of which three were private.

It moved in 1940 to Fretherne House, in Church Road, in the building that is now The Doctor’s Tonic public house. This was a boys’ prep school, but when war broke out the pupils were evacuated and the building became vacant.

Fetes were held every summer to keep the hospital going. There was an annual dinner and dance at the Cherry Tree and a hospital week was also held annually. If finances or a piece of essential equipment was urgently needed a phone call to one of the large factories in the town usually brought a favourable result.

One very successful fund-raising stunt involved a band of Garden Citizens who posed as highwaymen and stopped cars on the North Road, demanding money for the Cottage Hospital fund. No donations meant no passage through the area.

What shall we do with it now?

After Queen Elizabeth II hospital opened in the early 1960s the Cottage Hospital was leased to the local Health Authority for the care of the elderly. When its lease expired in 1978 several applications were considered by the council. These included a nightclub, a private hospital and an executive training centre. These were all rejected.
Eventually the building was purchased as a pub/restaurant, re-named the Doctor’s Tonic, which opened in November 1982 and still exists today.

Did you ever spend any time in the Cottage Hospital as a patient? Perhaps you remember visiting a friend or relation there or maybe you worked there. If so, share your memories with us. Log on and leave a message.