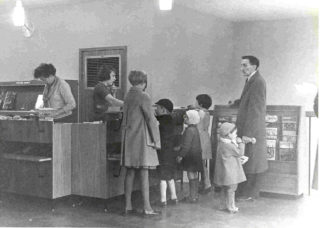 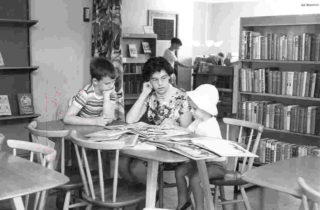 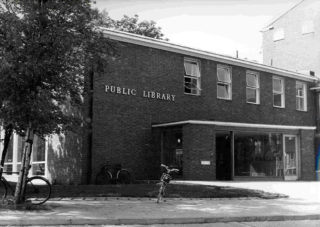 New Town Book Club up and running. Cost 3s 0d (15p) to join. Everyone lent a book to the club which made available 500 books for any resident to borrow.

The Subscription Library and the Free County Library joined together. The subscription was abolished. The library moved from Lawrence Hall to rooms in the Old Upper Handside Farmhouse

The Library moved from Handside to the wooden builders huts on The Campus site, which had been vacated by the Garden City Company. The Library now had two fully paid assistants and fifty volunteers.

The Library moved to rooms in the newly built Council Offices building, but the library soon outgrew its accommodation and the Children’s Library moved back to the wooden huts.

The Library moved to a vacant house, No 9 Guessens Road, which was owned by Theodore Chambers (chairman of the Garden City Company). Eventually Hertfordshire County Council bought the house and the library stayed there for twenty one years.