You are here: Home>Places>Neighbourhoods>Haldens>Glaxo Smith Kline 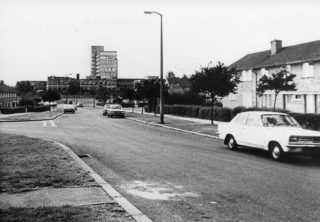 These two photos were taken in roughly the same spot in Sloansway looking towards Mundells. The top one was taken around the late 60’s early 70’s and shows the Glaxo Smith Kline building in all its glory.

The second was taken on 6th November 2010. Not a lot has changed, Glaxo had gone and the trees have matured but the road layout is still the same.