You are here: Home>History of Welwyn Garden City>Where Do You Think You Live?>Memories of Handside Lane

We were right on the edge of the town 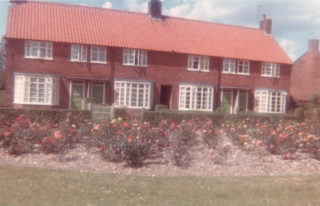 The family home in Handside Lane. If children used to run through the flowerbeds Joy remembered her dad always went out and told them off! 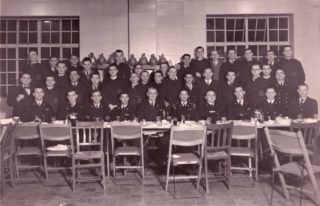 Joy was born in Broadwater Road. Her early memories of the town were recorded in April 2011 by the Welwyn Garden Heritage Trust as part of the Where Do You Think You Live? project.

Joy’s parents had moved from Scotland when they married and her father found work here in the building trade thanks to a friend of the family. Six months after Joy was born “we moved to Handside Lane and we lived there. Well, my parents lived there for the rest of their lives except for six years when they were in Scotland during the War”.

Joy remembered “going to the opening of the new Stores in 1939 I think it was. It was about that time I really remember before I started school. I don’t know how old I would have been. I was born in 1935 so I was about three or four and I remember that Marsden Road was just a track. There was no – it wasn’t made up. We were right on the edge of the town then because there wasn’t anything beyond Lemsford Lane. Well, Springfields was there. I think it was probably built after our houses were built.”

During the War “at the end of Handside Lane on Lemsford Lane, where Lakeside School is now, there was an army prisoner-of-war camp. There were Nissen huts there and then when the War was over they did make them into dwellings for people who were homeless. Temporary but they made use of them. I don’t remember the soldiers being there although my friends who live next door to me in Newfields they said that they used to go and shout at the Italian prisoners “silly old Eyeties” but I don’t really remember that.

But I remember the Nissen huts being there because we came back in 1946 in the March. ‘Cos my father worked – when the War started he had to work in de Havilland’s because they had to do War work and he was on maintaining the planes and then when they were bombed – De Havilland’s was bombed and dad wanted us to go back to Scotland. And within days of that happening we went back, my mother and I, and he stayed for a while and then he got transferred with the War Air Ministry to another aerodrome up in Scotland doing the same work but of course soon as the War finished his job was finished. So he came back down before we did because we had sub-let the house in Handside Lane to some friends. It was very fortunate that they needed somewhere to live as they had just come to the Garden City and they needed a house and so they lived in our house until we came back and then they had a house built in Fordwich Road.”

Evacuees had arrived “immediately the War started because there was panic everywhere and these children arrived and they came from Golders Green”. The family took in two sisters “their names were Pearl and Sylvia Grodinski and there are a lot of shops in North London with Grodinski the bakers and I often wonder if it is the same people. It would be interesting to find out. But, as I say, they didn’t stay with us very long. They were homesick and their mother came to see them. Well, I think it was ridiculous that they were living so near, and if there were any bombs we were going to get them as well as they were – as soon as they were, so she took them home again.

We did have another girl who was also homesick. I don’t know what her name was. She was older. Well, she seemed a big girl to me, but she might only have been 12 or 13 but I was only five and she didn’t like it either. I think when you have come from London it was a bit of a contrast, Welwyn Garden City was quite tame, and then we didn’t have any more. Then we were evacuees ourselves. We went up to Scotland after the Hatfield bombing.

I remember one thing. My mother was quite nervous when the bombs were dropping. There were two houses in Handside Lane bombed and I remember going to see the damage the next morning but my mother was very nervous because my father was out at the fire service most nights. I don’t know how often he went but he did seem to be there – away from – I suppose they slept there in case there was a call. Anyway one night there was bombing going on. It was the night these houses were bombed up the road and she got out me of bed because we had a mattress on the sitting room floor – because we weren’t suppose to go upstairs – and she got me up, put my coat on and we went out the front door. I never questioned where we were going but the air raid warden called out “Where do you think you’re going Missus?” and she said “I’m going in next door” and he said “Don’t you know there is shrapnel flying around?” so she said “I don’t care what’s flying around I am going in next door”.  So we went in and stayed with Mrs White, who was our next-door but one neighbour, and we started to do that. Either they came to us or we went to them for a bit of company because she had a little girl a little bit younger than me.”