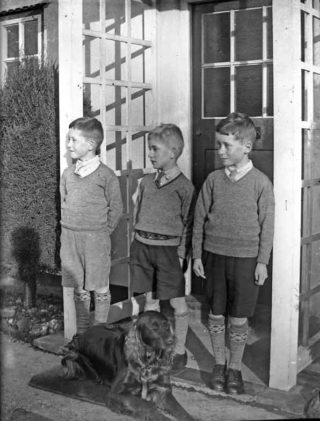 John and his brothers 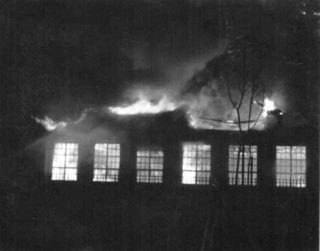 John’s parents Wally and Edith came to WGC for work in 1922 living first in Handside Farmhouse. The family lived in Guessens Road then moved to Elm Gardens.

This recording was made in November 2010 as part of the Where Do You Think You Live? project run by Welwyn Garden Heritage Trust.

The audio clip covers John’s parents’ move to the town in 1922.

John went to the nursery school then “the infants and primary school in Applecroft, Handside Lane, next to the Dancing Studio. In about 1935 Parkway School was finished and we were all moved over there. The Headmistress there was Miss Coe who had a rather fearsome reputation but she was highly regarded. As I mentioned there was a fire soon after and we all trooped back to Applecroft and in fact continued there of course. I have very happy memories of school days – we were all well catered for by the local clinic and dental and doctor and health facilities. Dr. Smith one of the first doctors in the town brought me and my twin into being in that Cottage Hospital and many other young children.

All the children used to go to the local cinema on Saturday morning for the cowboy shows  – we would all rattle down the centre of Parkway as we were going. I remember going round the first Memorial to Ebenezer Howard which was, of course, opposite the shops. The top end of Howardsgate – left hand side but since demolished and replaced by the medal sunken in the ground at the top of Howardsgate.

Of course I remember the rail tracks- all round the town bringing building materials – clay I suppose from the clay pits – all through the woods from where the Gosling Stadium is now.  The Welwyn Builders headquarters was in fact in Bridge Road East which is the site of Woodside House.”

“…When we were very young the two of us joined the Cubs – which were meeting in the Lawrence Hall… And of course through the War when we couldn’t get to the coast we joined the Youth Hostel Association whose initial headquarters were up at Mr Catchpole in Meadow Green opposite the Barn Theatre. The organisation was organised from there and we used to cycle three weeks every summer holidays round the country out through mid Wales to north Wales and then down to Devon and Cornwall and in order for these children to raise funds for the three weeks cycling tour, we used to work on Barons Farm at Lockleys stoking up the hay. interestingly enough in Barons Farm which is at the back of Lockleys of course Sherrardswood School there are a large number of walnut trees were planted there by the French prisoners of war after the Napoleonic wars – I don’t think this is generally known.”