You are here: Home>Places>Neighbourhoods>Handside>Valley Road, Handside

How I came to Valley Road 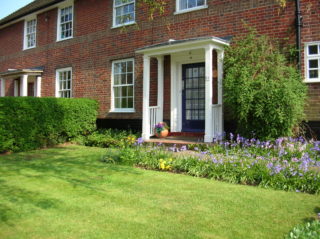 Around 1958, I was an apprentice at De Havilland’s in Hatfield. and needed to find somewhere to live.   So, how to find digs? Adverts in newspapers didn’t seem much help so I decided to use a technique some other enterprising ‘prentice had tried, or said he had tried:  choose somewhere that looks a nice place to live and knock on a door.  Welwyn Garden City seemed a good choice.

In the 1950s a stranger knocking on the door would not provoke a call to the police.  When the resident answered, explain as follows:  “I understand you have digs to rent”, or words to that effect.  I must admit I did find this lie a bit morally taxing, but needs must when the devil drives.  Needless to say the normal response was “Oh, no that’s not right.  Where did you hear that?”  I would then explain, as I had been advised, that a student at the ‘tech’, which of the group I couldn’t remember, was the source.  Producing no candidate residence, this process can be slow, may not work and, requiring a lie, ethically questionable. But it was worth a try.   However, I was lucky.

In those days there was nothing North of the campus, beyond the long-gone railway line and I wanted to be away from the east side of the main-line railway.  I had picked Valley Road.  I can’t remember completely now why that road particularly, but it certainly met the essential “nice place to live” requirement and in those days it was on a ‘bus route to Hatfield if the weather was really bad.  Not that I can ever remember affording to go on the ‘bus to work or to the tech, but I can remember pushing my bike through six inches of snow.  Anyway, after a few fruitless tries, I got a response that was just what I wanted.  “No, not here but maybe you got the wrong number.  Perhaps it was Mrs. S next door; she was talking about getting a lodger.”   Well, the tip was right.  Mr. and Mrs. S did indeed have a spare room they were willing to offer as digs; bed, breakfast and evening meal were part of the deal.   That must have been one of the luckiest days of my life.  I stayed with them till I finished my apprenticeship, then stayed on till I finished my PhD at Imperial.

I was treated like a son.  Commuting from that home was far preferable to going in to some scrubby flat in London.  The day I left to go abroad, my younger brother, just about to start a one year assignment in Borehamwood, having seen me off at on the boat at Southampton, returned to Valley Road, took my place and stayed till he left for Cambridge to do his doctorate.  Some years later, he and his wife were back in a different house they bought in WGC, in Valley Road, of course, later upgrading to yet another one also in Valley Road.  Part of the family is still in Valley Road.

Mr. and Mrs. S had a little boy, well below school age when I first met him, who is now a well established figure in the arts world.  By a complete coincidence, involving transatlantic travel and another university, I’m a part-time colleague of his daughter who was much surprised (fortunately pleasantly) when I walked in to her office and said I knew her grandfather and her father from 50 years ago:  “Oh, wow! My Dad told me about you two brothers”.    Now, visiting family in Welwyn Garden City, from the other side of the Atlantic, walking down from the station, it feels like coming home, especially as I started the connection . I think my little lie might be forgiven.