You are here: Home>History of Welwyn Garden City>Where Do You Think You Live?>An East side home

An East side home

"it was terribly cold and very wet and there was clay all round the house, nothing else at all"

Where The Nightingale Sings... 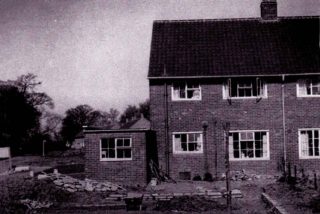 This memory was recorded in January 2011 by the Welwyn Garden Heritage Trust as part of the Where Do You Think You Live? project.

Lillian’s husband Tony was the grandson of Ebenezer Howard. She was born and brought up in St. Albans and remembered coming to Welwyn Garden City. “It was like coming to another world, really that was how you felt because it was so different from a normal town. It was like a town in the country, not like St Albans at all, and I remember Tony taking me firstly to the woods to hear the nightingale in the woods.”

Lillian moved to Welwyn Garden City in 1952 from Barnet where she was then living with her husband and two young children. Their new home was on the East side of the town.

“My husband was working in Welwyn Garden City on earth moving. He had an earth moving business and he was doing a lot of work because of all the houses and so on that were being built at that time by the New Town Commission, so he was eligible to have a house here so we put in for a house and in early December 1952 we were shown a house in WGC which had just been built and nobody had ever lived in it before. And it was like a palace to me because I had been living in an old Victorian house just on the ground floor with two small children and an outside toilet and no bathroom and there was a bathroom and two toilets in this house. Anyway it was terribly cold and very wet and there was clay all round the house, nothing else at all, just a little lane that went wandering this way and that and I didn’t know where on earth I was!

We managed to settle in OK and got on with our lives and there were a lot of other people doing just the same coming from London and people who had just come out of the Forces, wanted to start a family and there were a lot of young children and my two had a lovely time, playing with all the other children who were around and about and everybody wanted to be friendly and make friends so really it was very, very – everybody was very neighbourly and we had quite a good time apart from the fact that there were no shops nearby.”

When the family moved in there were no shops at Woodhall. “That was built, and the church, it was all built after we came – and no Hall Grove. The houses in Beehive were being built at the same time, similar design to this. Mr Worby organised a travelling shop in a coach and that was a godsend because he used to come round one a week and everybody round here was absolutely delighted, so that made a big difference. Ludwick House had been turned into a sort of community centre and we used to have mothers’ meetings there every week and we got to know other people”.