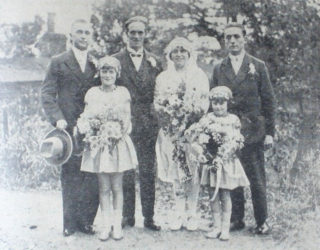 This wedding appeared in the Welwyn Times on 4 October 1928 page 7 along with the following article:

“The marriage of Miss D. G. Dunton, only daughter of the late Mr. and Mrs. A Dunton, of Welwyn Garden City, and Mr. B. Cooper, son of Mr. R. W. Cooper, Hatfield Hyde, was solomised at the Hatfield Hyde Parish Church on Saturday, the Rev. S. R. Tomlinson officiating.

The church was already beautifully decorated for the Harvest Thanksgiving. The bride looked very charming as she walked down the aisle on the arm of her brother, Mr A. Dunton, to the starins of Mendelssohn’s “Wedding March.” The bridegroom’s brother, Mr H Cooper, was at the organ.

The bride wore a plain ivory crepe-de-chine and georgette dress (designed and made by Madam Fitness), with a silk lace veil and coronet of orange blossom. She carried a shower bouquet of white chrysanthemums and also a bound ivory Prayer book, a gift of the bridegroom.

The Missess Marjorie and Molly Baldry, nieces of the bridegroom, were bridesmaids. Their dresses were pink ray-de-chine with gold caps and shoes, and their bouquets  were white  chrysanthemums and dahlias. Mr G Dunto was best man.

Mr and Mrs Dunton are making their home in Welwyn Garden City. Many beautiful presents were received.”