You are here: Home>Topics>Sport and Leisure>Sports>When the World Cup came to Welwyn Garden City

When the World Cup came to Welwyn Garden City 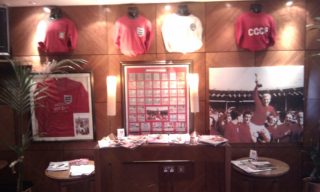 When England last hosted the World Cup in 1966, three foreign national teams came to stay and train in WGC.

First to arrive were the French squad, who stayed at Homestead Court Hotel in Homestead Lane on the run-up to the tournament and trained at King George V Playing Fields. Goal posts were also erected at Gosling Stadium and they later moved there.

Mr Jacque George, President of the French Football Federation said “Living in the pleasant surroundings of WGC should help the French team do well in their quest for the Jules Rimet Trophy.” Unfortunately it did not, and the French team failed to qualify out of the group stages.

Next to arrive were the Argentine team. They thought they would be staying at a swish London hotel and spent 30 minutes on the doorstep of Homestead Court arguing with their manager about whether to stay or not. However, after spending a couple of days in WGC they were offered the chance to move to a London hotel and refused.

The West German side slipped into the hotel on 26 July having qualified for the finals, due the following weekend. They began their training at Bragbury End, Stevenage, the following day. They made it plain they were confident of defeating England in the final. They had considered training on King George V Playing Fields but felt it was a little too bumpy and built up. They feared too many local people would come out to watch them.

Their fears were well founded. Once news got out that the World Cup finalists were staying in WGC, crowds of youngsters flocked to Homestead Court but reports at the time in the Welwyn Times suggest that German side were very gracious and only too pleased to give out autographs and sign footballs for the young football fans.

The Germans enjoyed their stay at Homestead Court so much they gave the staff 10 tickets to the final and organised transport for them as well.

Were you one of the young fans who remember the excitement when the World Cup came to WGC? Why not log in and share your memories