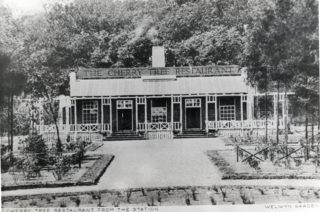 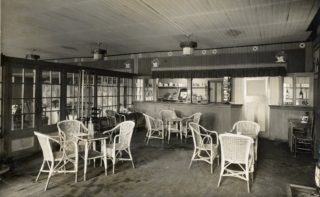 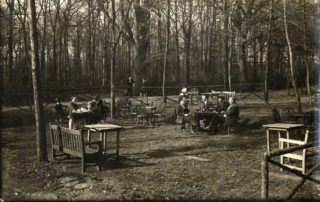 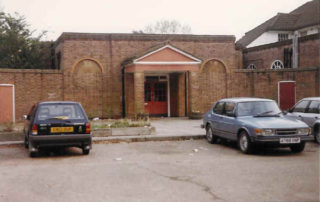 Opened Easter 1921, this was the first subsidiary enterprise of the WGC Company. Situated next to the railway halt, it provided visitors and Garden Citizens with meals and entertainment, and gave the town a much-needed social centre. It certainly looked like a charming building, a timber construction which lay slightly further from the road than its successor (now Waitrose). It featured a larch pole veranda where meals could be taken, extensive gardens, a billiards room and bowling greens which were added in August 1925. A further extension in 1928 saw the Bridge Hall open to accommodate large meetings and dances.

In 1932, the new, permanent Cherry Tree was built to replace the by-now decaying wooden structure and WGC Company sold on their interests to Whitbread the brewers.
The new building had much more space and was a great success at first, but many  thought it lacked the charm and intimacy of the old building and it slowly lost its place as the town’s social centre, especially after the new Stores was built in 1939, when the Cherry Tree had to compete with the Parkway restaurant.

During the 1960s and 1970s many rock bands performed at the Cherry Tree. I have heard rumours that ‘The Who’ and ‘The Small Faces’ both played at the pub. Led Zeppelin certainly did, in April 1969, and it would have cost you 7/6d for a ticket.

The pub also got something of a reputation in the 1960s as a hangout for drug users. Subsequent research suggests that the level of drug use was no better or worse than any other town centre pub in Hertfordshire, but as the newly-formed Drugs Squad was based up the road at Stanborough, it was obvious they would investigate their immediate area first and when the national press picked up the story the Cherry Tree was featured.

Over time the pub turned into a Beefeater restaurant, becoming a branch of Waitrose in 1990. Controversy centred over the ripping up of the bowling greens to provide the supermarket’s  car park as dozens of Garden Citizens ashes had been scattered there over the years.
Look carefully the next time you drive or walk past Waitrose for the small homage to the pub which sits on an outside wall.

Do you remember seeing any groups in the 1960s and 70s that went on to stardom?  Perhaps you worked at the pub. Why not log on and share your memories.