You are here: Home>Places>Pubs>Chieftain Public House>Memories of Welwyn Garden City in the 1950s and 1960s 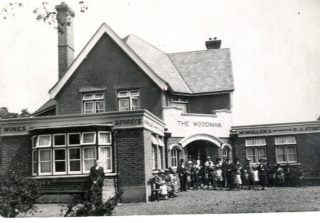 The Woodman pub in Cole Green Lane was quite big.  Although it had some small bars, it had one enormous bar in which there were rows and rows of long tables, with bench seats down each side of the tables. On a Saturday evening there would be over 100 people in the bar. This large bar was a relic from the war years when there was a camp at Mill Green, and The Woodman was popular with the soldiers!

With the permission of the Landlord, the ‘Sally- Ann’ (Salvation Army) personnel on a Saturday evening used to work their way around the tables with their ‘tin’ and their ‘war cry’ papers!  Often the Sally-Ann lasses were requested to sing ‘The Old Rugged Cross’ hymn. The pub was later modernised into smaller, more intimate bars and its name changed to The Chieftain.  Eventually the owners decided to close it, and flatten the whole site!