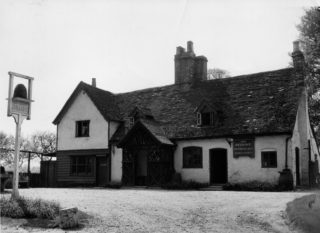 As a pub The Beehive dates back to the middle of the nineteenth century, when it doubled as a general store, hence the name.

At the time of Welwyn Garden City’s founding in 1920 the landlord was William Swift and it served a small farming community who lived in that area of Hatfield Hyde. It was one of only two pubs on the estate, the other being The Woodman, (later The Chieftain).

The Beehive was the goal for many families when taking a Sunday stroll across the fields from the new houses around Handside Lane.

It remained a Whitbread pub for many years, and when I moved opposite the pub in 1983 it was still very much a traditional pub, with white clad walls, very similar to a lot of country pubs in the East of the country.

It became a Beefeater steak house when the The Cherry Tree became Waitrose and was extensively remodelled.

It was sold on to Charles Wells around five years ago.

Behind the pub is a wooden club house. I am not sure who runs it but I heard that the building was originally one of the huts purchased in 1920 when the whole business of running the town was conducted from several huts on what is now the Campus. I’d be interested to hear whether there is any truth in that.