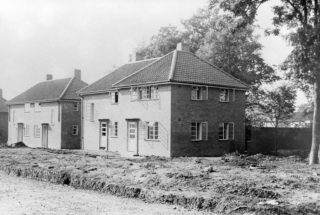 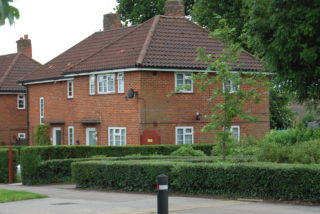 The one thousandth council house was built in Welwyn Garden City in 1937. On Saturday 9th October there was an opening ceremony. The following article appeared in the Welwyn Times on 14th October 1937.

The first council Houses in the town were completed in November 1922, and consisted of 50 houses designed by H G Cherry, F,R.I.B.A., in Applecroft Road and Elm Gardens. The thousandth house, no. 134 Ludwick Way, forms part of the council’s ninth scheme and it is one of a group of 110 houses and 8 flats designed by C W Fox, F.R.I.B.A. The total cost of the scheme, including land, roads, and building will be £47,533 10s 9d.

Scheme 9 is extremely attractive, both in layout and in the design of the houses. A children’s playground and a group of 12 garages is included, and the construction and fitting of the houses represents a very high standard that is a credit to the town.

The house opened by Mr Wrigley had been furnished by Welwyn Stores Ltd., and it will remain open daily for a month as a “show house” from 10 til 1 and 2 till 5, including Saturday and Sundays.

We heartily recommend all residents to see the house for themselves, and we have no doubt that they be amazed at the comfort and attractiveness that it is posible to obtain in a three-bedroomed parlour type house rented at 14/8 per week. A point of special interest is the inclusion of a very ingenious “back to back” grate, with a hot water tank system embodying storage and calorifier. All pipework is in copper and the pipes are all concealed. The new type of grate will enable one fire to be used for living room heating, cooking range in the kitchin, and continuous hot water from the central boiler. The kitchins are well equipped and there are plenty of electricity points throughout the house. Each living room has a built-in radio aerial and earth system which will avoid unsightly external aerial wire or exposed wire leads internally. Another good piece of planning provides a combined fuel and cycle or pram shed, brick built, and the provision of rustless metal line posts in loose sockets in the gardens. The flats intended for aged or single people have a sound proof and fire resistant floor between the ground and first floors.

At Staurday’s ceremony after a few words from Councillor G Lindgren, chairman of the housing committee, Mr Wrigley expressed his pleasure at the occasion and opened the front door of the thousandth house with a special key handed to him by the architect, Mr C W Fox. After a detailed inspection of the scheme, councillors and their guests toured the town in two buses, stopping for an inspection of the new Boy’s Hostel and Men’s club in Peartree lane, under the guidence of Captain R L Reiss.

At the end of the tour the coucnil gave a tea-party at the Cherry Tree with Mrs F E Hopkyns, chariman of the Urban District Council in the chair. In a brief speech she touched upon the council’s housing problems, with rapid growth of industry in the town. In particular, she said, there was an immediate need for a rapid increace in educational facilities, and Mrs Hopkyns spoke appreciatively of the County committee’s plans for next year (outlined in last weeks Welwyn Times). The Technical School, was, she said of special importance to manufacturers in the town. Speaking of other town services she said that through the sympathy of the County Council there was now a little hope of a Maternity Unit being added to the new hospital scheme.

Mr Wrigley expressed his pleasure in being invited to open the house. He entirely appreciated the work being done in Welwyn Garden City. The population, he had been told, had risen from 767 in 1921 to 12,500 at the present time, and there could be few places where such a rate of development had been carried out on such excellent lines. In his inspection of the new house that afternoon the most remarkable thing that struck him was the quality of the work. Mr Wrigley went on to speak of the soundness of Welwyn and Letchworth’s scheme of providing planned communities. He spoke feeling, he said, “as a pallid city worker who had to spend three hours a day travelling and who got his exercise by moving from strap to strap like a monkey in a primeval forest.” Most other Local Authorities had the problem in their housing of redressing the mistakes of the past but Welwyn had its own problems of creating a new community and making its own history. He was confident that the spirit that had created the Garden City would carry them forward to great success.

The Welwyn Garden City Directory for 1938 gives the resident as J Lonsdale.