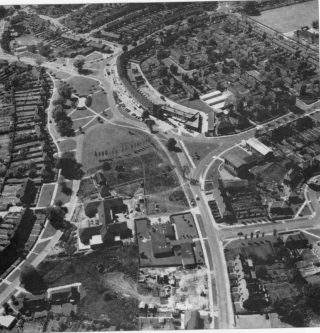 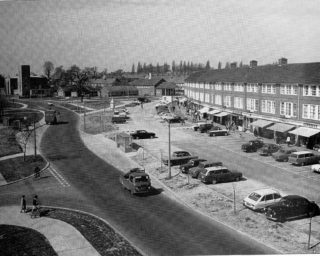 My first memories of Woodhall Stores was when I was 4 years old, in 1946.  I remember that it was a Friday and my dad rushed me down with him to Woodhall and we went into the Midland Bank which was directly on the corner next to Ludwick Way and to the left of the Bank was the Royal Mail Post Office.  My dad made a weekly visit on a Saturday to the Midland Bank to do his banking and also to get anything else he needed.  After he went to the Bank, he went next door to the Post Office where he sent his various post and telegrams and paid 8d in National Insurance with his Class E Contribution Card.

In March 1955 I found a job in the main Woodhall shop (that belonged to Welwyn Stores Ltd) on the food counter.  We finished grammar school at 3.30pm and I cycled along up Stanborough Road along Broadwater Road then down Woodhall Lane up Hollybush then there was Woodhall and it took me 20 minutes and I worked a 1 hour shift every weekday after school except in August and Easter when I went to visit family. I had 10 minutes before I started work so I went into the Fine Fare shop and bought a small little Vimto drink which I took into work. I fancied something a bit more exciting so I went to work for Welwyn Coachworks in 1957, when I turned 15 years old.

The Woodhall stores were opened in October 1938 to the general public, and initially a lot smaller. As the population grew, it was extended. The first three shops was the hardware shop, the council rent and tax office plus the main shop belonging to Welwyn Stores Ltd. My uncles, when they each came to visit in the Garden City, loved browsing the hardware shop at Woodhall as they both worked in that industry. The shops were renovated into individual little shops during the late 1980s and early 1990s following the construction of The Howard Centre. Such a real shame but there we go.