You are here: Home>Places>Shops>Tommy Cooper comes to town

The opening of the Off-Licence in Co-Operative House 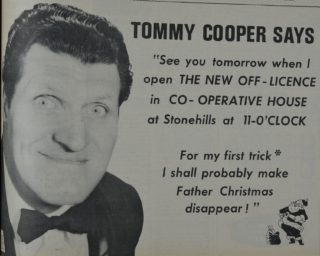 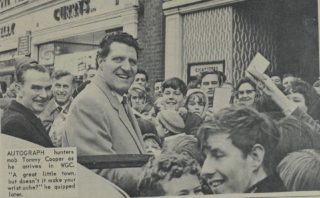 The following article appeared in the WelwynTimes and Hatfield Herald on 11 November 1966, page 19:

He will open Co-operative Off licence

It is just 30 years since a successful petition to the House of Commons won permission to open a Co-operative shop in Welwyn Garden City.

The victory marked the end of a bitter struggle between St Albans Co-operative Society and the old Welwyn Garden City Company – the all powerful local authority in 1936.

Applications had been made and rejected a score of times until – as a last resort – signatures were collected in a bid to enlist the aid of the local MP, Rear Admiral Sir Murray F Sueper.

But inspite of opposition from every quarter Co-operative shopping was destined to become a part of WGC life.

In a front page advertisement in the local press a few weeks before Christmas, 1936 the local branch of the St Albans Co-operative Society announced that it could supply “practically all our customers’ Christmas needs”.

This year it will be able to supply ALL of them.

A traditional wine-tasting ceremony attended by a couple of Spanish wine maidens – in full Spanish costume – and star of stage and screen – Tommy Cooper, will launch tomorrow’s grand opening of the new off licence, in the Stonehills store.

Designed by the country’s leading shop fitters, Messrs. Courtney Pope, the off licence is already stocked with every conceivable brand of wines, spirits, beers and liqueurs ready for the Christmas rush.

It is a free house not tied to any brewer, distiller or wine merchant, so there is literally no limit to the amount or variety of the stock.

Presiding over the festivities will be Mr R D Jackson, local grocery manager and buyer.

Mr Jackson began his career with the Co-op as an errand boy at the age of 15, and has “worked his way up from the ranks”. He has been with the local branch for three years, and will be in direct control of the new off licence.

The following article appeared in the Welwyn Times and Hatfield Herald on 18 November 1966 page 23:

Everything goes right for Tommy…

…Except that crowd wouldn’t disappear!

Tommy Cooper the magician famous for the tricks that always goes wrong, failed again on Saturday when he failed to make a WGC crowd disappear.

Tommy arrived to open the new off-licence at the St Albans Co-operative Society’s Stonehills store, but there were times during his walk from car to store when he didn’t think he was going to make it.

Fans swarmed around the car at the entrance to the store and the comedian was carried more than escorted through the food hall to the new off-licence.

Signing autographs all the way, he finally arrived at the wine-tasting counter, where local girls Mrs Beth Rogers and Miss Jennifer Ratcliffe -  dressed in full traditional Spanish costume – gave him glasses of sherry.

Then Tommy Cooper performed his first feat of magic. He opened the off-licence, sipped a glass of sherry, signed a little boy’s autograph book, waved out the window to the overspill crowd who just couldn’t get in and posed for a picture with four month old Barry Hobbs, of 49, Guessens Road – and all at the same time!

Shouts of “put you hat on, Tommy” caused him to don his traditional Fez, and still signing autograph books, he made his way to the toy department where he was scheduled to make Santa Claus disappear.

But at the request of about 100 WGC boys and girls he allowed yet another trick to fail so the Santa could carry on handing out the free sweets.

The journey from Santa’s grotto to the manager’s office for a well-earned cup of coffee proved just as arduous as the one from his car, and he was still signing as the office door began to close.

But there is no escape for the famous, and a horde of young fans laid seige to the area outside the manager’s office door.

Suddenly the door burst open and two little girls – more insistant than the rest - said: “Please Mr Cooper, we’ve been trying so hard to get near you.”

And little Theresa Butler and Pat Campbell found that their temerity was to be rewarded. They were ushered into the magical presence at the express wishes of Tommy himself – “let them in and i’ll sign their books, i’ve got children of my own” – and as they had no books to sign, two very happy little girls went home on Saturday morning quite convinced that happiness is Tommy Cooper’s name on the back of your hand.

After a display of magic for members of management and staff of the local store, Tommy Cooper was entertained to lunch at a local hotel, where he performed his last trick of the day – making a steak disappear.

Asked how he liked the Garden City, Tommy replied ” It’s a great little town, but doesn’t it make your wrist ache?”