You are here: Home>Topics>Events and Ceremonies>Olympics and Paralympics 2012>London 2012 Olympics 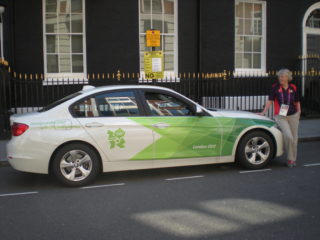 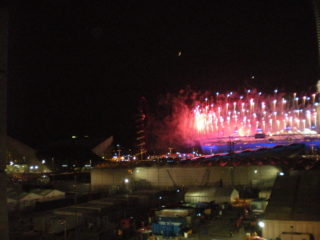 “Dear Jennifer Thank you for signing up to Volunteer to Win! You will receive information by post or email as the volunteering programme develops.   Your membership number is: 824149. We wish you every success with your volunteering. The Volunteer to Win Team” .

That’s how it all started for me, not long after the announcement that London had been awarded the 2012 Olympic Games on 6 July 2005.  We weren’t called Gamesmakers then.  At that time I was working 2.5 days a week and 2012 was a long way ahead.

By December of 2005, LOCOG (London Organising Committee of the Olympic and Paralympic Games), chaired by Sebastian Coe (the Rt Hon The Lord Coe, KBE)  had appointed Paul Deighton as their Chief Executive.  One can only imagine the amount of work that then went on to bring the Games to fruition.  The ODA (Olympic Delivery Authority), charged with providing the facilities for the Games, was given access to the site in the summer of 2007.

It wasn’t until 2010 that people were again invited to volunteer at the Games.  You were required to complete a lengthy and detailed on-line application form, and over 250,000 people responded.  Then we all waited.  My invitation for an interview was at the Excel Centre on 6 June, 2011.  On arrival it became evident that this session was looking for drivers and it was a friendly but formal in-depth interview.  Subsequently we were required to complete on-line driving assessments and the AA had been authorised to carry out detailed checks on our credentials.  At every juncture there was the opportunity to say “no”.  Final confirmation of acceptance came through to me on 25 November 2011.

Now things really started to move.  In February thousands of Gamesmakers each attended an Orientation session at Wembley Arena.  This was a wonderful opportunity to get together, see some inspiring presentations, practice Mexican waves and eat Cadbury chocolate Wenlock and Mandeville mascots.

Each Gamesmaker had a personal portal in the on-line Gamesmaker Zone.  This was how communication was made, confirming training schedules etc.  There was also a My Status page, where the shift schedule was published.  Again this proved the breaking point for some volunteers, as initially we were all given 15 x 10 hour shifts, across all hours of day and night.  However it was possible to re-negotiate them.

Next, in May it was Role Specific Training.  A random group of 3 drivers were placed in a car with an assessor and asked to drive between various Olympic venues.  They were at pains to assure us that it was not a driving test.  Some volunteers elected to drop out after this exercise.

I should say at this point that 70,000 Gamesmakers were recruited, to something over 700 different roles.  Whether or not they all had tailor made Role Specific Training I don’t know, but we 750 or so drivers certainly needed an introduction to the BMW 3 and 5 series vehicles, the unique satellite navigation system they were installing, and familiarisation with using a two-way radio (but not whilst driving, of course!).  A rumour abounds that some Gamesmakers spent several hours practising Hi-Fives, which certainly paid dividends at the venues with the visitors.

Later that month it was off to a former bonded warehouse neatly tucked between West Ham Bus Station and the Docklands Light Railway, to collect the Gamesmaker uniform.  Throughout all these appointments I was met by friendly well-informed and well-trained other Gamesmakers – the system was without fault.  The Gamesmaker kit consisted of:  2 casual shirts, 1 jacket, 1 baseball cap, 2 pairs of trousers, 2 pairs of socks, one pair of trainers, a shoulder bag containing a water bottle and a Swatch watch, all contained in a large black canvas holdall.  As a Transport Gamesmaker I had been issued with a unique A-Z road atlas of London including large scale details of all the Olympic venues and the drop off points.  It also showed where all the Olympic lanes would be.  We had already been provided with a notebook and pen of course.

In June we had a further opportunity for training, this time called Venue Specific training.  On this occasion groups of four were handed the keys to a car and sent off to find named Olympic venues.  We weren’t even given a radio that day.  Thankfully my group didn’t get lost, and it proved invaluable training in the use of the SatNav system.  Again, some people decided that after all, this was not for them.  Fortunately a 25% drop-out rate had been factored in, so there were still plenty of us left to provide the services offered.

There were three Transport (or Fleet) depots in London – Hyde Park, Excel and Stratford, the largest being Stratford.  Drivers were designated T1, T2 or T3.  T1’s were allocated to one single client for the duration (i.e. IOC members).  T2’s were allocated two.  T3’s were for any other eligible clients either on demand, or by formal request.  My role, along with the majority of drivers was as a T3, based at FDO, Stratford.

And so to the Games!   The Fleet Depot officially opened on 9 July, well ahead of the Opening Ceremony.  It was a good opportunity for the drivers to find their way around the Olympic Park and test the security entry points. Each time we re-entered the Park, even to go to the Olympic Village, both ourselves and the vehicle were thoroughly checked.  It also gave the military time to practice too!   They were just brilliant.

Our clients were members of the so-called “Olympic Family”.  In my case almost exclusively members of their National Olympic committee:  Ghana, Holland, Mexico, Canada, Australia, France, Argentina, Germany (their Chef de Mission), Uruguay, Nigeria, and Guam.  Every driver had a tale to tell, and this is when I wish I had recorded them all.  One certainly gathered up Usain Bolt during the night following his triumph on the track.  Another was invited into Roger Federer’s home in Wimbledon for a cup of tea.

My “moment” was when I took two Dignitaries accompanied by their Gamesmaker Assistant, to Wembley for a 19.45 match kick-off. We arrived at 19.40, in a rush, to be told that the match was being played at Old Trafford.  Thankfully no-one blamed me!   Personally I had managed to obtain tickets for myself and a German friend who particularly wished to go to the Games and attended an Equestrian event at Greenwich and also saw some rowing at Eton Dorney.  As a Gamesmaker I had the opportunity to watch a dress-rehearsal for the Opening Ceremony at the Stadium.  On the night of the Opening Ceremony I was on duty at FDO but unsurprisingly there were few requests for transport.  Having watched some of the ceremony on the screens in our Depot, we then picked up our chairs and went to the 8th floor of the John Lewis multi-storey car park, where the BMW’s were, to continue watching on another TV.  When it came to the fireworks we just leant over the side of the car park to watch.  It was unreal.

The majority of the journeys I did as a driver were between the Olympic Park and the OFH (Olympic Family Hotels), principally on Park Lane.  Watching dawn rise across Park Lane, and also the Olympic Village, will remain in my memory for many years to come.  In addition there was the foray to Wembley, also out to Wimbledon and Hadleigh Farm.

The Paralympics, being altogether a smaller event, required less transport and I was not needed.  But I did manage to get a ticket to events in the Stadium one day, which was  wholly memorable, and finished off the visit by a trip up the Orbit in the sunshine.

Subsequently a lottery was held for up to 9,000 Gamesmakers to line the Mall for the Victory Parade and once again I was fortunate to be there.  The atmosphere was incredible, and we were surprised to see the athletes holding up placards saying “Thank You”.  We have been thanked many times by our Team Leaders, Lord Coe and our “champion” Eddie Izzard, whose hand I shook on The Mall.

I don’t think I will be taking up the offer of a National Qualification from McDonald’s.  Nor to buy a used BMW.    Now we are left with the memories, the uniform, and a letter of thanks from the Prime Minister.   It is time to reflect on a unique experience, which was enervating, exhausting and joyous.  Congratulations and thanks to every single LOCOG, BOA and ODA employee who brought it all to fruition, and also to my family and friends who encouraged and supported me on my personal Gamesmaker journey.