You are here: Home>Topics>Events and Ceremonies>Raising the Welwyn Garden City Centenary Flag 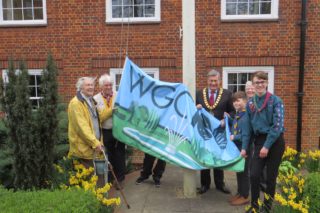 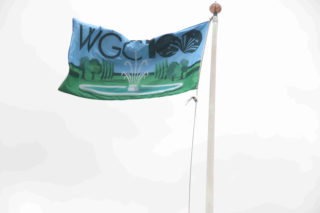 Friday 13th March 2020 was the occasion of hoisting a specially designed flag for the Centenary of the town.

The flag was made possible by the generous donation of David Sutcliffe, who was born in the town in 1930. After being evacuated to Buxton for the duration of the war, David returned to WGC and realised an ambition qualifying as an architect in 1951 and running his own partnership for the next 37 years. During that time he played a part in the design of 500 houses in Welwyn Garden City. He was also responsible for the completion of St Francis Church, including St Francis Hall, the Jack Lee Hall in Woodside House and the Elizabeth House Care Home in Panshanger and other schemes for the then WGC Housing Association. David retired over 20 years ago, in 1998.

Over a year ago David contacted the Foundation with his suggestion for a Centenary Flag. His initial sketch has been worked up by Paul Hillary of Red Echo Design Ltd to the final design, strongly influenced by the bold, artistic style of the 1920s.