A visit from Elizabeth, the Queen Mother 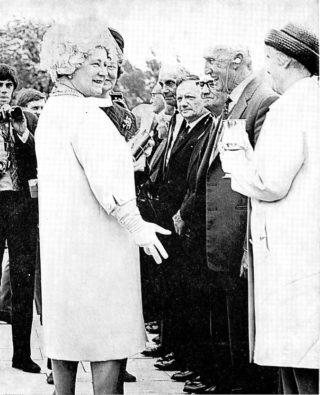 Molly Jennings, WGC's first resident, is presented with a goblet by the Queen Mother, during the town's Golden Jubilee Celebrations in 1970
Welwyn Garden City Library

The town’s 50th anniversary in 1970 was a royal occasion.

The highlight of WGC’s Golden Jubilee year was a visit from Elizabeth, the Queen Mother, on 30 May of that year. Wearing green, HRH walked among the thousands of residents who turned out to wave flags and cheer.

She opened a memorial garden to the town’s architect and planner Louis de Soissons at the top of the Campus and presented a goblet to WGC’s first resident, Molly Jennings. She also gave tankards to 19 other town pioneers.

This was also the year that the park at Stanborough Lakes officially opened with a grand water carnival in the autumn of 1970, attracting 40,000, which choked the roads and car parks for miles around. Much of the earth excavated during the improvements to the A1M, was used the landscape the park, creating the artifical hillocks around the lakes.

Do you remember the Golden Celebrations of 1970 and the Queen Mother’s visit? Did you go to that original water carnival? Share your memories by logging on today.