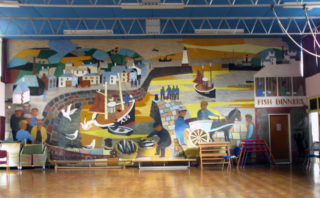 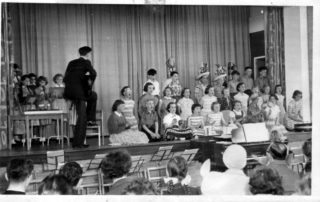 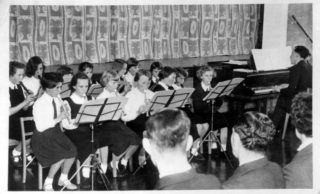 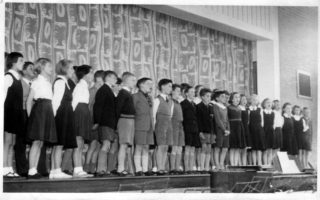 The school opened in 1951 and the first headmaster was Mr A. G. Luck.

I began at the school in 1954; I believe the headmaster was Mr Edwards, or if it wasn’t  he must have started soon after as I don’t remember Mr Luck. Blackthorn was a low, modern building with plenty of windows. It had a large playing field fringed with bushes, a playground, its own small wood (though special permission had to be granted if you wanted to play there as it backed onto gardens and the neighbours weren’t to be disturbed), and, at the front, a ‘dell’, which was a grassy hollow occasionally used for lessons on warm summer days.

In the hall was a hand-painted mural which covered the back wall, called ‘Seaside and Harbour’ and it was painted by Julian Trevelyan and Mary Fedden in 1952. It was a lively work of art depicting a curvy harbour wall with a lighthouse, a fisherman with baskets of fish, a pony and cart, fishing boats, gulls and a café serving fish dinners with a black cat stretching up to a parrot in a cage outside. The mural’s flat, bold colouring was in the style of the railway posters around at the time.

My first teacher was Mr Kirkpatrick.  I can’t remember all the other teachers, but those I do recall include Mrs Squibb, Mr Morgan and Mrs Buckingham. Mr Ellery taught art – he had us making a couple of murals depicting Heaven and Hell, each child making one clay tile – and later he left the school and moved to the West Country where he founded the Tremaen Pottery in Marazion. My favourite teacher was Mr Guinery, my form teacher for the last two years that I was at Blackthorn. He was a very tall man with boundless enthusiasm and with the ability to think ‘outside the box’, making his lessons both exciting and informative. One of our topics was ‘The West Indies’ – we covered the classroom walls with adverts cut from newspapers of West Indian products, we went to the Imperial Institute to learn about coffee production and to see the instruments used in a steel band, and visited the Natural History museum to draw the birds that were seen in Jamaica, Barbados, Trinidad and Tobago. Mr Guinery had taught himself to play the guitar, and at the school concert we performed a song that he had written called ‘Blackthorn Calypso’, as well as ‘Island in the Sun’, a popular number at the time that was sung by Harry Belafonte. We accompanied the music with our own ‘steel band’, including genuine steel dustbin-lid drums loaned to us by the Imperial Institute. Later, he arranged for the class to record the songs onto a record, though typically, I was off ill at the time.

Our headmaster Mr Edwards was a kindly man, who was responsible for introducing us to classical music in a very clever way. Every morning as we entered the hall for assembly a piece of music would be playing from the gramophone, and on the stage would be a notice board bearing the name of the piece and the composer. So Grieg, Mozart, Beethoven, Bach and others were absorbed painlessly into our brain.

My name then was Susan Warne, and my school friends included Valerie Lutkin, Wendy Rogers, Joan Searle and Heather Hicks; it was a happy time and a happy school.