You are here: Home>Topics>Schools and Education>Schools>Early Education of the Garden City

Early Education of the Garden City 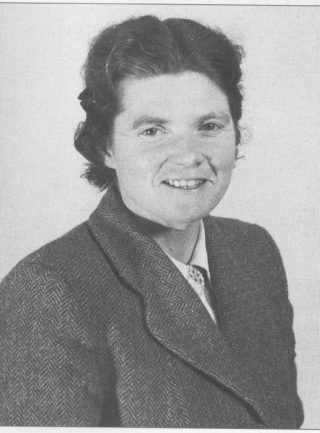 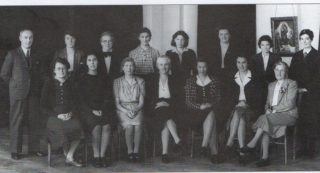 Ludwick School staff in 1939 - Miss Linda Sing is in the middle on the bottom row with her grey hair and black shoes. 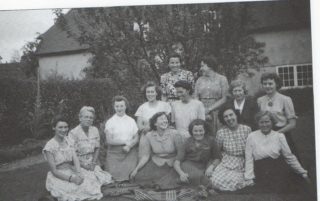 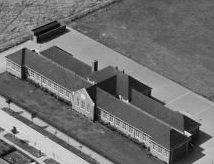 I started Ludwick School (now Holwell Primary) in September 1947 – the headmistress was Miss D Scurfield. The Misses Laura and Linda Sing had both retired as headmistresses of Ludwick and Peartree in 1942 and 1946. Ludwick was an infant school which housed five to seven year olds in early education, and the teachers had to be qualified to a certain level. It was a very good school.

We lived on Cranborne Gardens, and Ludwick School was quite accessible. I left the house at 8:15 every morning and walked north down a little alleyway and then turned right which arrived at Salisbury Gardens. I then walked straight ahead of me onto a little path in the middle of trees, and then Ludwick Way appeared. I turned left down to the end, then right and there was Ludwick School. Miss Scurfield, our headmistress, drove down Ludwick Way to get to the school so all the pupils (and staff come to it) used to look out for her.

Before school started, Miss Scurfield would make everybody aware of her presence by slamming the door closed behind her as she left the building. Then, we all turned round to look at her. You could see she’d been as a headmistress for some years, by her organization and particular ways. As the bell sounded at 8:50, Miss Scurfield instructed the students to line up silently in front of class teachers. Until 8:50, she walked up and down supervising us all. At 8:50, we would be let in.

We started school at 8:50 AM with a prompt start due to Miss Scurfield’s prompt attitude. Our morning break was 15 minutes at 10:30, and lunch was for 1 hour 20 minutes at 12:10. We finished at 3PM, and a lot of the pupils used to hang around on the school side of the gates against Miss Scurfield’s wishes. The caretaker locked the school up at 3:10 PM, after Miss Scurfield had left. We all watched as she drove out the school gates, giving everybody a fierce look.

Dorothy Scurfield was in her mid 40s when I started Ludwick School, and was very strict and precise. She had a yellow 1946 Rover 12 which we all used to look for as we walked to school in the morning, as she drove down Ludwick Way. Miss Scurfield was vile, and loved humiliating the students when necessary. Success of her school was the best for her, and she always used to a personal announcement to every class.

Miss Bush -I don’t remember much of Miss Bush, but I do remember she was from Hackney (she had a Cockney accent). She used to come up to the Garden City on the train every day, and loved shopping at Welwyn Stores. I usually saw her on a Saturday when we did our family shopping. She left in 1954, a year after I started grammar school, and didn’t return to Welwyn Garden City much at all.

Mrs Roth -Mrs Roth lived at 43A Leigh Common then 8 Heather Road in Welwyn Garden City with her husband Henry Roth and their daughter Janet. Janet did go to Ludwick School and then onto Peartree Primary like me, then I think Janet went to The Howard School. Her husband Henry was an electrician. I think Mrs Roth moved to Panshanger in 1967 or 1968 and taught at Sir Frederic Osborn School, but I can’t be absolutely sure. We had a school reunion in 1974 and she didn’t show up, so must have died or moved away.

Miss Gilmore – She was my form tutor, and a trained teaching of typing and shorthand. She lived in Ware, and caught the train to Hertford then onto the Garden City. She left to marry Miss Bush’s brother Bill (the rumour at the grammar school I fondly recall) in 1952/1953 and then moved to Ethelred Close just up from us off Ludwick Way. She taught at Peartree Primary for about five years, and then in 1957/1958 went to teach at Welwyn Secretarial School teaching typing and shorthand. By the school reunion in 1974, she was living up north in Doncaster with two children. Never heard/seen her since.

Miss Salmon – She was in the next classroom along with her form group (before she left), and was trained in sewing & needlework. She was there from when Miss Sing started (1939) and then left in 1948 to teach at Welwyn Garden City Grammar School. I think I recall her living on Knella Road, but I can’t be sure. She taught Domestic Science at Welwyn Garden City Grammar School, I do remember her neat and orderly classroom. She was still there when I left in 1959, and they used her partner’s name to get a council house on Woodhall Lane in the 1960s. I don’t think she was ever married or had children.

Miss Sawfield – A vague memory of her high heels, and she must have been at Ludwick for some years I should imagine. I think I heard somebody mention she went to Heronswood Secondary Modern School in 1962 and drove a black Mini. She mysteriously disappeared in 1966 (in the Welwyn Times) and rumours said she went abroad, former pupils remembered she loved travelling. I could’ve got the wrong person but next door to us in the late 1970s and 1980s there was a single woman living next door to us on Ludwick Way with a black Mini that looked from the 1960s. I had a Mini in the 60s. She was quite intelligent and loved making things, especially sewed items.

Mrs Collins – She made her way round the schools of the Garden City. Mrs Collins’s only formal teaching qualification was the 2-year Certificate in Education (Cert Ed) which she completed in 1947 but maintained high grades in every subject so she was taken on as a school teacher in 1947, and taught at all the schools in the Panshanger, Peartree & Handside areas of the Garden City with Ludwick being the longest of 5 years.  She moved to Heronswood Road in 1959 and taught at the two schools in pre-Panshanger before going to Haldens in 1962 then to Digswell in 1965. She eventually moved out of Welwyn Garden to North London (Edgware area) in the late 60s, and in 1974 at the reunion she did turn up with her husband and during our little chat she was still a teacher at Copthall Grammar School which on Google shows it in Edgware. Think she died in the 90s. Her husband Leonald was a coach driver, and she had two girls and a boy. The son became a teacher of craftsmanship (as we called it then) and trained at a teacher training college near Harlow (1968 – 1970), and he did a brief stint at Howlands Junior before going to teach at Sir Frederic Osborn in Panshanger where he lived for many years. One of the girls married an engineering teacher.

Miss McKelvie – Only place I remember Miss McKelvie was at Welwyn Garden City Grammar School. She drove an Austin A35 in the 50s, and another one of our teachers Mr Pedrow lived next-door to her so she gave him a lift (his wife drove their Ford Anglia to work in Hertford). She eventually bought a 1960 Ford Anglia which she absolutely adored, and parked on the kerb in the same spot. Miss McKelvie was quite old when she worked at Ludwick School (obviously did, hence the picture), in her late early 50s. She must have left in 1951 or 1952 because she was certainly teaching History at the Grammar School when I started in September 1953. I remember she drove past Woodhall up Ludwick Way then along Knella Road past our house – certainly no children or husband in sight at all with Miss McKelvie at all. She did move near Cranborne Gardens on Knella Road in about 1965 when she taught at The Howard School but by early 1967 she was living on Sweet Briar teaching at Thumbswood Primary School. She came to the 1974 reunion on her own, but told me she had moved to near the Applecroft School in the Handside neighbourhood and retired in 1972.

Miss Johnson – She specialised in Maths but taught as a primary school teacher at Ludwick until she had her son in mid 1956 (married to Gerald Wright in 1955). They bought their house on Cranborne Gardens from the council for £450 in 1957 on a 5-year mortgage because it came off the council, and soon it was extended to a 25-year mortgage. We used to go round to their house for a cup of tea on a Thursday night every week – such a pleasant couple! Mrs Wright returned to teaching Mathematics at Attimore Hall Secondary Modern School in 1961 and was there until 1968 when the school merged. She did return to teach at Howlands Junior School (1968 – 1971) and at Rollswood Infant School (1971 – 1975) and then they moved away to Worcestershire. Their son lives near Shoplands in WGC.

Miss Bradshaw – Ivy Bradshaw came to Welwyn Garden City from Wales in 1948 after completing her degree at university in Hertfordshire, and lived on Salisbury Road. She taught at Ludwick Infants (1948 – 1952), and then at Blackthorn Primary School (1952 – 1961). Afterwards, she taught at the College of Further Education for about 30 years (1961 – 1993). She sealed to spouse to a smart looking gentleman who worked at Welwyn Stores, and they lived on Barnard Green together in rented rooms.