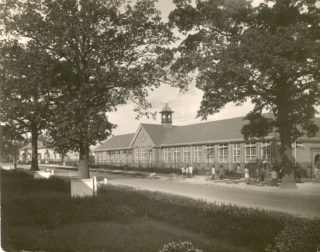 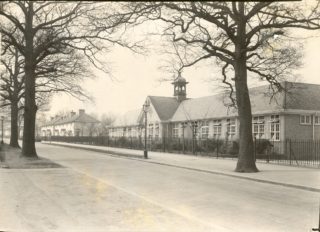 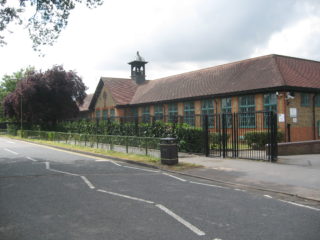 On 18th January 1927 Pear Tree [sic.] School opened with 91 children. It operated in Peartree Clubhouse, later to become the Boy’s Club. The reason for the new school was the start of a housing estate at Peartree in 1925 for the workers of the new factories in Broadwater such as Nabisco. Lack of roads and pathways meant that conditions were poor underfoot and the only alternative school was Handside, which later became Applecroft.

The start of the school was not an easy one, by 26th January the first case of ”verminous head” had been reported and within a month 2 cases of Diphtheria forced the temporary closure of the school. In 1927 many children were absent due to lack of footwear in wet weather and a ”Boot Club” was soon started! The promised 9 months to build the new school in October 1927 was rather ambitious and in reality it took 18 months. The first head teacher Miss Jessie Brown was to be the shortest serving head in the history of the school. By the summer of 1928 Miss Laura Sing had started a long association with the school and was there to oversee the transfer to the new buildings on 9th April 1929. Numbers had now swollen to over 300, and within 18 months with nearly 450 children on roll the new building was already inadequate – 2 classes were being taught in the Clubhouse. With 528 on roll by January 1932 it was a relief that Ludwick School [now Holwell] opened later in the year to take the Infant children. The new head teacher was Laura Sing’s sister. Miss Sing started a busy programme of parent’s meetings as soon as she arrived. These were used both to educate parents about the work of the school and also to initiate Jumble Sales and Whist drives to buy extra equipment for the school; the first purchase was a Gramophone. Parents were also regularly involved helping in school, quite an innovation in the 1930’s.

Following a poor inspection report on the school before she took over Miss Sing had targeted the behaviour and attendance at the school. She also focussed on academic work with a rigorous programme of testing as recommended in the 1928 report. Soon Peartree children were winning awards in competitions all around the county. There were a number of trips out and many official visitors came from as far as Barbados to see the school in action. The next inspections in 1932 and 1936 gave glowing reports and reflected her efforts to create a community.

There was no further major development before the war and Peartree was to experience a period of stability. The timetable reflected an unusually wide range of lessons including Geography and History as well as Music and including a wide range of practical activities. There was even swimming on the timetable [weather permitting] at the new Stanborough Pool. An annual programme of special events had been built up with special days for Empire day and May Day festivities as well as Sports Days and Christmas Parties.

Wartime brought many new challenges to Peartree. Official and unofficial evacuees swelled numbers well past 600 and classes were held in the new Community Centre at Woodhall, in St. Michael’s Church Hall and back in the Clubhouse. Many of these evacuees stayed only briefly. Ironically with de Havilland in Hatfield and Digswell Viaduct the area was regularly on the Luftwaffe run into London and experienced many air raids warnings though few actual bombings.

In the midst of this activity Miss Sing retired after 14 years and Miss Gladys Collings took over during 1942. As the war came to an end she was heavily involved in the 1944 Education Act plans to revitalise education. Peartree was to become a show school for the new project based education and films and slide shows were made. Visitors from round the world continued to come throughout the 1950’s.  New buildings came in the form of 3 huts [1942] to take the extra numbers on site and a canteen [1946] for the new school dinners. As the Garden City expanded after the war new schools were opened and many children left Peartree to attend a more local school. Perhaps the saddest event of this period was the death of Miss Mary Lines who had started at the school in 1927, and served as a teacher in the area for over 50 years.

After 3 years under Mr. Scarnell, Leslie Charles took over in 1963. Numbers were steadily reduced from 450 to about 320 as smaller families became the norm, and the chance was taken to reduce class sizes by retaining staffing numbers. The school was noted for its social role under Mr. Charles and continued to take a major role in community events. The school continued to keep abreast of modern education initiatives and developed a strong structure to support individual learning.

When Jack Holmes took over as head in 1976 the school still had outside toilets, As the 1980’s began so too did work to finally replace these and the wartime temporary huts and canteen with a purpose built unit that converted the ‘E’ shape of the building into a ‘B’. This work had been campaigned for since Miss Collings in the 1950’s. The school shrunk to 150 at this time during the rebuilding of the old concrete houses in the Peartree area. Though families left and returned stability was retained through great staff continuity. Bernard and Sibelle Branwhite [Sibelle as Miss White!] and Winifred ‘Gis’ Gismondi could trace their service back to Miss Collings time. In this period the school became known for its sporting prowess with teams winning honours at football, cross-country and chess on a number of occasions.

By the time Bob Dean took over as head in 1989 numbers had risen to 220 as the new, less densely built homes, were filled. A consultative approach to realise major changes during the years to come was established. The internal fabric was modernised, with furniture dating from the early 30’s and 40’s being replaced along with an investment in softer aspects such as carpeting and curtains. Fundamental working practices and policies were also introduced, in order to develop a broad and relevant curriculum, and in 1992 Peartree was recommended for a National Curriculum Award. Teachers were often visiting the school to view styles of team teaching and the approaches to independent learning.

Imaginative has been used with the rooms in the school, and Peartree now boasts a purpose-built computer room. From the early 1990’s the school grounds were developed and they comprise several themed gardens and courtyards to make a pleasant, stimulating and useful environment. In 1996, the first after-school club in Welwyn Garden City, and the first independent club in Hertfordshire, was established.

In 2001 Sherie Hart took over the headship of the school and continues to increase the school’s involvement with the local Peartree area and Welwyn Garden City in general. As a result of this work Peartree School is now the Hub School for Extended Schools for Welwyn Garden. Significant improvements continue to be made to the fabric of the school, in recent years;
– The kitchen has been completely re-equipped.
– Full disabled access into and around the school provided.
– External school doors have been replaced increasing the  light levels along the corridors.
– Our external fencing and gating has been upgraded and  now provides a double ring of security for our pupils.
– A room and associated offices, “The Orchard Room”, has been made available through Extended Schools, for use by the local community.
– The creation of the Orchard Room meant we moved,  rebuilt and re-equipping our I.C.T. suite.
– A music room has been created and equipped.
– A classroom, “The Green Room”, has been created. This   room is primarily intended for use by small groups of pupils requiring some extra support.
– The classrooms have been re-furnished and KS1 classrooms re-curtained.
A school council for pupil representation of “the children’s voice”, a whole school PE kit and several others still in the pipe line.

The Peartree area has retained a village atmosphere, with many families being able to trace their connections with the school over several generations. The school has aimed to maintain itself as a key part of that community throughout its history. While physically looking the same from Peartree Lane as it ever did, behind the scenes the school has moved with the times and aims to stay forever as modern as it was in 1929.

This article was created from material on the Peartree School web site, see http://www.peartreejmi.herts.sch.uk for more information about the school.