Theatre Society wins the US Belasco Trophy in 1927 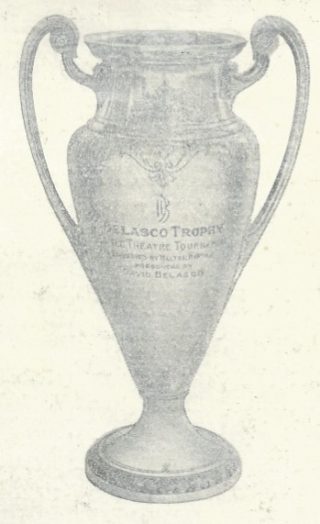 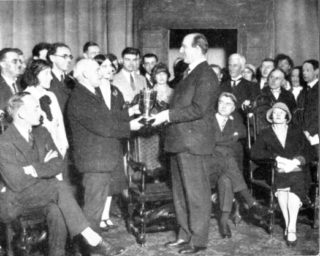 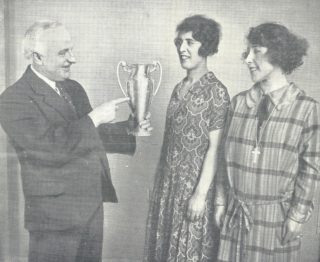 The wining cast with the Balesco Trophy.

In February 1927, the Welwyn Garden City Theatre Society entered a play into a national drama festival and won, what was at the time, the prestiges Howard de Walden Cup. That play was called Mr Sampson, a one act play written by Charles Lee; and was directed by C B Purdom, one of the founders of the town and a well known drama enthusiast and practitioner.

Later that year in May, the same play was entered into a US amateur drama competition held in New York where it won the Belasco Trophy, at the time a significant achievement for a non US drama group to win on their home soil.

The Belasco Trophy competition was created by David Belasco, a prominent theatre director and producer in New York. The competition was for amateur drama groups, open to any group willing to take part. The competition started in 1923 but ended in 1931 due to lack of entries as a result of the economic climate of the day.

The Mr Sampson cast was Ernest Selley, Lilian Hinton and Elsie Colson, all from Welwyn Garden City and regular performers in Theatre Society productions, all of whom travelled to New York for the competition. C B Purdom, the cast together with Stage Manager Charles Huggett and his wife plus Mr C L Hinton all sailed to New York on the liner Tuscania departing from Southampton on 27th April 1927, arriving back in London on the same liner on 25th  May 1927. The performance of Mr Sampson was on the 5th May and was the last of three teams performing that evening. The winning team was announced at the end of the competition on Saturday 7th May. Such was the impact of their success that the production was again performed at the Vaudeville House in New York and they were offered a three months tour in the US which they had to decline. On the voyage home on board the Tuscania, another performance was given in aid of the Seaman’s Charity.

By an odd quirk of history, it is interesting to note that 1927 was also the year that Charles Lindbergh made his non stop flight from New York to Paris. Although nothing to do with the Balesco Trophy, the director and cast were actually in mid Atlantic returning to England when Lindbergh made his flight on 20th – 21st May, hence passing over their ship, the Tuscania.

On return to England, the British Drama League held a celebration dinner on 30th June 1927 at the Hotel Cecil in London, attendees including Sybil Thorndyke and Lord Salisbury.