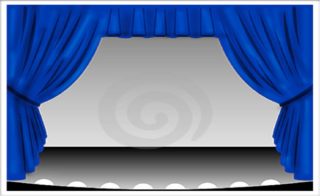 The Welwyn Thalians were formed in 1929 from a merger with two other amateur societies, the Barnstormers (drama) and the Operatic Society (music). The Old Welwyn Theatre in Parkway, later the Embassy Cinema, was the first venue. Most of the early shows were Gilbert and Sullivan Productions. Dame Flora Robson, an early and active supporter, can still be remembered sweeping down the aisles.

In those days ticket prices were 2/4d to 5/9d and a special London train, the 10.52 pm, was put on to take patrons back to the city. The society’s first producer was A W Richardson and it wasn’t long before musical shows and ‘straight’ plays poured out in succession while the reputation of the Thalians grew. A large scale production of St Joan was reported favourably at length in the Daily Telegraph no less. Festival triumphs took the society as far as America, where the ‘Lord Howard De Warden Cup’ was won with Not This Man by Sidney Box. The Thalians were also first at the Letchworth Festival.

Before closing down for the duration of World War 2 in 1939 they presented the world premiere of Castles in the Air written for the society by Sidney Box and Montgomery Tully with music by May H Brahe.

After the war, in 1947, the Thalians were back in business with The Gondoliers and continued filling the Welwyn Theatre until in 1962 when, after a successful opening performance of Carousel, a fire broke out and the stage was destroyed. The members pulled together and the remaining performances were completed at a local school.

When the Campus West Theatre opened in 1973 the Society moved in and has been performing there ever since.

For many years, the Thalians used Lawrence Hall in Applecroft Road for rehearsals until they moved to a purpose built hall in Bridge Road East. Lawrence Hall has since been demolished and replaced with housing.