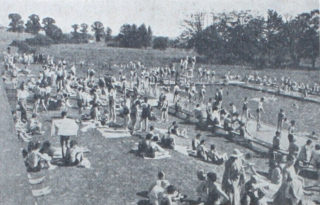 “Critics of the Lea Valley Pool have described it as “unpopular” and “dismal” but this photograph taken last week-end by Mr C F Plowman shows that it is still used by some citizens. Over 1,100 visited last Sunday.”