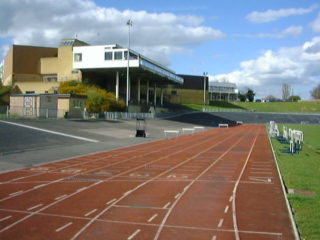 The sports hall was opened in March 1976 and is named after Reg Gosling, the first Chairman of the WGC Development Corporation. There had been plans to site a stadium in the disused pit off Stanborough Lane from before the Second World War, when WGC Company had an agreement with the army for earth moving to take place.

A public appeal led to the stadium, cycling and running track opening on 4 July 1959. In 1962, a clubhouse was added, along with a small stand.

Do you remember the Stadium site when it was just a rubbish dump. Maybe you were involved in sports there in the 1950s or 60s or raised money for the project. Why not log on and share your memories.