You are here: Home>Topics>Sport and Leisure>Sports>Welwyn Garden City Football Club 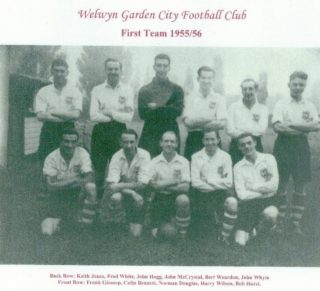 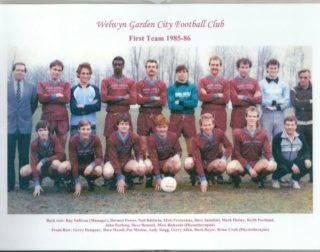 Founded in 1921, Welwyn Garden City FC started their days in the Metropolitan League. The Club then moved to the Spartan League, for the first of two spells, in 1927. During the 1927/28 season the Club gained its first honour, winning the Herts Charity Shield, beating Hoddesdon Town 5-2.
In 1952 Welwyn Garden City joined the London League, later to become the Greater London League. At this time the Club were managed by Harry Hibbs, the one time England goalkeeper, Harry being one of two ex-internationals to be in charge of The Citizens, the other being Alex Massie who was capped North of the border.
1954 saw the Club return to the Spartan League and two years later they were elected Associate Members of the Football Association.

The next stop was county football with a move to the Herts County League in 1959. The Club moved to its present home, Herns Lane, in 1968 and staged their first fixture at senior level, against Knebworth in the Aubrey Cup, on the 16th November that year.
In 1973 Welwyn Garden City joined the South Midlands League and won the Premier Division championship at the first attempt. The following season they reached the final of the League Challenge Trophy, only to be beaten by Barton Rovers, 3-1 on aggregate.

1976/77 saw the Club lose their top-flight status, and there began a five-year battle to reclaim it. During these First Division years the Club were to finish no lower than 5th and in 1981/82, the championship winning year the Club scored over 100 league goals on route to the title. In the championship year the Club also reached the final of the League Challenge Trophy, but once again had to settle for runners-up, this time losing 3-0 on aggregate to Stotfold.

1984/85 brought about cup success at last, when under the management of John Sneddon they beat Pirton 2-0 to lift the first ever Herts Senior Centenary Trophy. At the end of the season John Sneddon decided to call it a day and he was replaced in the close season by ex-Sudbury Court boss, Ray Sullivan, and his first task was to rebuild the side. Twelve months later the Club finished runners-up, missing out on the title with some erratic form in the closing games.

In 1986/87 and 1987/88 the Club lifted the Herts Charity Shield, making them only the sixth team to retain the Shield. The close of the 1986/87 season also saw floodlights installed at the Herns Lane ground.
In 1988/89 the Club gained a top six league finish along with an appearance in two cup-finals, the League Challenge Trophy and the Herts Senior Centenary Trophy. However these were both lost in the space of five days.

1996/97 City looked to local man Malcolm Doctor, who the previous year had guided Citys archrivals Hatfield Town to second place in the South Midlands League. Everyone at the Club was optimistic about further glory days returning to Herns Lane. Two cup-finals were reached, the League Challenge Trophy and the Southern Combination Cup, but once again the Citizens missed out at the final stage.

Upon the departure of Malcolm Doctor the Citizens forged a link with Conference neighbours, Stevenage Borough FC, and strengthened their squad with Boros EFCO youngsters along with the management pairing of Dave Bullock and Bill Bannister. However despite reaching the Third Qualifying Round of the FA Cup the season collapsed midway through and with the break up of the squad, a battle with relegation followed.

1999/2000 saw a rebuilding process with former Somersett Ambury V & E boss Dave Steadman being appointed and being given the task of leading the Citizens into the new millennium. However the clubs downward trend continued and in 2001-02 the club were relegated into the First Division thus ending one of the longest unbroken spells in the Premier Division.

Guillermo Ganet was appointed with the task of restoring the glory days back to the club and following two seasons steered the club back to the Premier Division. The clubs first season back saw them finish in a very creditable third place however the end of the campaign saw the manager and most of the playing squad depart for Berkhamsted Town.

Howard Cowley was given his chance in 2005-06; he brought about a wealth of experience from not only the South Midlands League but in all divisions of the Ryman league. During his tenure the club had an excellent 19 game unbeaten run in all competitions and also equalled their best ever FA Cup run when losing narrowly to the then Conference South leaders Histon. The club also exceeded its best ever run in the FA Vase by reaching the Fifth Round only for an administrative error to deny them the chance to go even further.

Players Joe Devera, Nick Brindley and Harry Hunt were offered contracts with Barnet FC and the seasons top scorer, Bradley Woods-Garness went to Conference side Farnborough Town. 2006-07 saw the club achieve fourth spot in the league, becoming the only side to beat eventual League and Cup champions Edgware Town at their White Lion ground whilst doing the double over local rivals Hertford Town with two fine victories.

Following the departure of Howard Cowley a succession of managers have tried to revive the fortunes of the club however this quick turnover of managers did nothing to ensure success in fact it had the opposite effect with relegation back to the First Division at the end of the 2009-10 campaign.

2010-11 saw the clubs poor form continue, this was not helped by having three managers in the season, Phil Read, Rob Pattwell and Simon Braine, the latter, with the help of assistant manager Adam Fisher, helped to steer the club away from the relegation drop zone. Adam Fisher has now moved on to Assistant Manager at Barton Rovers FC.

2012-13 saw Scott O’Donoghue working alongside Pablo Ardiles as the Assistant Manager for the first team and Mark Slater running the reserves. Scott left at the end of the season.