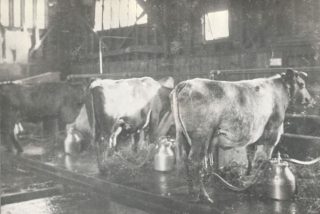 Cows being milked in the barn. 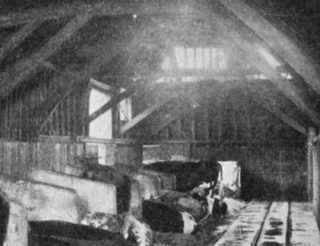 Cows in the Barn, today this is the auditorium of the theatre. 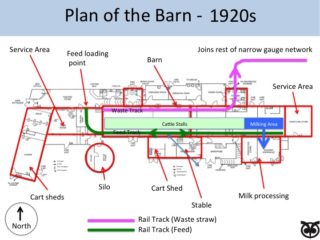 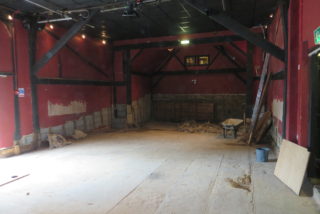 The exposed floor of the barn showing the railway track on the right running along the north wall. 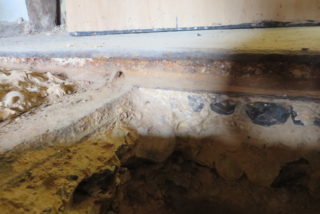 Detail of the railway track exposed during a trial dig to explore the concrete structure.

From the very beginnings of Welwyn Garden City in 1920, the New Town Agricultural Guild decided to establish a ‘Model Dairy’ with a modern and efficient means of providing milk for the residents of the growing town. Almost before the first house was started, the old barn on Lower Handside Farm in Handside Lane was converted into a milk processing facility that continued to operate as such until the late 30s. Prior to this, the barn had been used as a corn store and drying facility.

Creating the modern milking facility required a significant amount of modification to the barn, which at that time was some 320 years old. The plan was to install the milking machines and milk processing plant at the eastern end of the building whilst the western end was converted into accommodation for cows with stalls and a feed/waste management system incorporated into the structure.

A novel and perhaps unique concept for the period was the introduction of a railway system into the barn for the distribution of feed and removal of waste. In the early days of the building of Welwyn Garden City, use was made of a 2ft narrow gauge railway system to distribute building materials around the growing town, the railway track being moved to new locations as the town expanded. The system was developed for the Army in WW1, providing transport for military equipment on the western front. Captain W E James who by now was the chief engineer for the construction of the town introduced the railway following his experiences in the war to meet a need in the town where no roads existed, just muddy tracks.

Two tracks were laid in the barn, being cemented into the floor, one along the south wall, the other along the north wall.

The one along the south wall ran from the north western yard to the eastern end of the building and was used to distribute animal feed to the cows which were bedded in stalls constructed through the middle of the building.

The second track ran from the west end, along the north wall and exited the building at the east end where it connected up with the main narrow gauge railway system serving the construction work. The animal waste removed was distributed to various garden and agricultural concerns in the area for use as fertiliser.

The tracks and evidence of slurry drains are still in situ within the barn but are covered over by the auditorium floor though there are small sections visible in a few places. The recent work to incorporate new seats and floor in the auditorium exposed the tracks but great care was taken to ensure the tracks where not damaged, they continue to be preserved for the future; probably representing the last evidence of the narrow gauge railway system used in the construction of Welwyn Garden City.

The milk processing facility at the eastern end consisted of milking stalls which used mechanical milking machines, the milk being pumped into the adjoining lean too building where the milk was treated before being distributed to the local population using horse drawn milk carts. Distribution was managed by the Welwyn Stores and was initially by use of milk churns though milk bottles became the norm later.

A new addition to the barn as part of the complex was the distinctive Silo, built in 1922 to accommodate animal feed or silage. The silage was blown up to the top of the silo by a tractor driven blower, it then fell to the bottom of the Silo where it was taken as needed by the rail system to feed the cows.

The quality of the milk produced was to all accounts high quality as reflected in the various reports of the period. Much was made of this quality in the local press and by visiting dignitaries who were encouraged to sample it. One occasion was during the opening in 1922 of the adjacent Daily Mail Model Village by Field Marshal Earl Douglas Haigh and Dr Macnamara, the Minister for Labour, who were taken across the road to the barn to sample the milk, they were suitable impressed with the quality according to the Welwyn Garden City News.

By around 1927, the town had expanded to subsume the fields around the barn, which resulted in the cows having to move out, and the farm becoming redundant, an auction was held to sell off the lifestock and equipment.

Milk processing continued with the milk being brought to the barn from outlying farms. Improvements in processing were incorporated such as pasteurization, a cold store and more efficient bottling systems.

In 1932, a theatre was created in the area once used by the cows with the milk processing continuing to use the eastern half of the barn.

With the opening of the new Welwyn Department Store (now John Lewis) in 1939, the milk processing facility in the barn closed down and was removed to the new store, the barn then being taken over by the army and later sea scouts during WW2.

After the war, the Department Store employees used the old dairy space as a social club until 1969 when The Barn Theatre Club absorbed the whole building and created the Barn Theatre we have today.