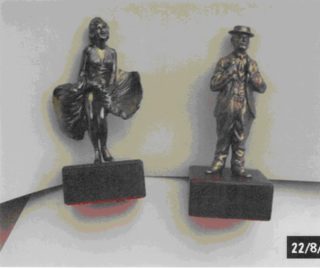 Angelino Arts was a subsidiary of Lone Star, and produced models of film stars. This idea arose from Bob Mills, who, along with two other individuals, carved the prototypes for the moulds, a highly skilled operation. The models were hand-painted and then mounted on bases, with small quantities made of each model due to expenses. The models were sold in London stores such as Harrods and Selfridges.

Due to the high cost of production, and the difficulty in acquiring the licenses for the stars from their respective Hollywood studios, the project was not a great success. Figures included Laurel and Hardy, Elvis Presley, Buster Keaton and Marilyn Monroe (pictured).