History of the Murphy Radio Company 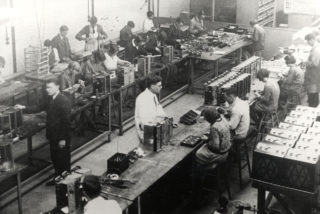 On a wet day in 1928 Frank Murphy arrived at the WGC Estate Office and asked to see ‘some sort of workshop where radio experiments could be carried out’. He set himself up in a garage in Brockswood Lane before moving to a sectional factory site in Broadwater Road later that year. By the end of 1928 the workforce had increased from eight to seventy.
In 1930 Murphy launched its four valve portable wireless. It was something of a revolution, its chief merit being its extraordinary simplicity of control compared to its rivals in the market.

Initially, the workforce was seasonal, but very quickly demand increased and by 1932 the company announced a new factory which would double the output and by the following year Murphy’s were employing 500, producing some 33,000 radio sets a year. They had become one of the leading companies in the town and saw continued growth up the Second World War, when they were one of the big six in the radio world. During the war they produced thousands of radios for the armed forces.

With the advent of television, a decision was made in 1948 to build a completely new factory to incorporate TV production and work began on the site in Bessemer Road, opening in two phases, 1955 and 1959.

In 1962 the Rank Organisation took over Murphy Radio and the firm became Rank, Bush, Murphy. TV and radio production ceased in 1964 when the company expanded into electronics. In January 1969 the company announced they would be moving to Ware and the following year another Rank company Rank Xerox moved into the site. By the 1980s Rank Xerox employed a workforce of 1,400 producing electronic assemblies and materials for its copier divisions.