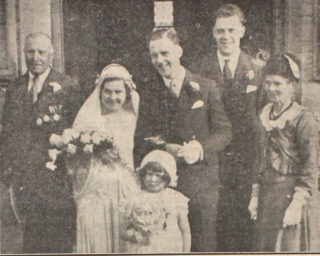 This wedding photo appeared in the Welwyn Times on 23 March 1932 on page 1 along with the following article:

“Sixteen years’ combined service at the Stores is the record put up by a young couple married on Saturday at Lemsford Church. They are Mr Jack Smith and Miss Ivy Annie Kathleen Bahets, of 3 Elm Gardens, each of whom served eight years at the Stores. Miss Behets was one of the first assistants engaged at the opening of the Stores in 1921.

Prettily attired in white crepe satin carrying white carnation, the bride, who was given away by her father, was attended by little Doris Kay, very sweet in blue crepe de chene. Mr Dick Haines was best man and officiating was the Rev. W. W. Clarke.

Among the numerous presents received by this popular couple were several from the stores, a clock from the staff, a canteen of cutlery from the management, and a breakfast set and tray from the provisions department.

The honeymoon is to be spent at Bracklesham Bay, Sussex”.