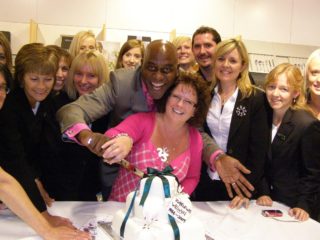 John Lewis Welwyn celebrated its 25th birthday on 30 July 2009. The building had been purchased from Welwyn Department Stores in 1983 and opened for business as John Lewis Welwyn a year later on 30 July 1984, following a major refurbishment, when the interior was considerably altered. One of the controversial changes was to take away the popular food hall on the ground floor. A campaign was organised to oppose this loss, which was somewhat answered by John Lewis when their food division Waitrose, opened across the road, on the site of the old Cherry Tree pub a few years later in 1990. Another casualty was the hairdressers that remained for a short while after the store reopened as John Lewis. The book shop, also on the ground floor, in what is now the Menswear department, remained until the early 1990s.

At an anniversary tea party for staff and invited guests on 30 July, current Managing Director, Andrew Slater, welcomed four of the previous Managing Directors back to the store. He reminded those present that it was not just 25 years that the building was celebrating in 2009. It was almost 70 years to the day that the present building had been opened and 40 years since famous TV chefs Fanny and Johnny Craddock, had opened the famous Welwyn Stores Food Hall. He further remarked that “the store had always been an important part of the community and fulfilled the vision of the town’s founder, Sir Ebenezer Howard, as being a real centre for the people of the town.”

During that day the store enjoyed a visit from TV celebrity chef Ainsley Harriott, who joined in the celebrations by cutting the stores birthday cake while over in the toy department `Darth Vader` and his storm troopers entertained young and old alike. The Partners in the branch (some 800 of them) also enjoyed a special Silver Anniversary party at Tewin Bury Farm. See also the memories of those John Lewis Partners who remember the transition from WDS.

Did you work for Welwyn Department Stores during the transition to John Lewis. Why not share your memories by logging on today.